moking weed is a civil liberty, and legalization can fight racism, and support communities, said iconic travel writer Rick Steves in a Leafly interview May 27.

The mild-mannered TV personality has lent his mainstream credibility to legalization efforts for 20 years as a self-professed soldier for NORML and the Marijuana Policy Project. This summer and fall Steves plans to stump for legalization in Deep South and Midwest battleground states, where he relishes preaching to voters outside the choir.

“I just like to confuse people with what they expect they’re going to be dealing with,” he told Leafly. “I always like to say, ‘I’m a hard-working, churchgoing, kid-raising, taxpaying American. If I worked hard all day long and want to go home and stare at the fireplace for three hours, that’s my civil liberty.’ And then I get a big round of applause.”

But before he hits the road, Steves will appears live on your laptop, desktop, or mobile phone on June 9, keynoting the International Cannabis Business Conference’s virtual symposium, which is co-sponsored by Leafly. Steves gives us a tour of his talk in this interview, which had been edited for length.

Leafly: You’ve said, “I believe ‘high’ is a place that we should be allowed to visit.” Can you recap your pot policy beliefs for folks new to this side of you?

Rick Steves: I just feel very strongly that smoking marijuana responsibly as an adult is a civil liberty.

I’m careful not to advocate smoking. I just think anybody who wants to smoke marijuana responsibly as an adult should be able to smoke, and I think this prohibition we got going is based on lies, it’s racist and counterproductive and it’s just wrong.

I have fun just apologetically saying marijuana is a soft drug like alcohol. I wouldn’t say it’s good. I would say if you want to enjoy it, you should be able to, so that’s my stance on this.

I’ve decided it’s good citizenship for someone who can get away with speaking out on this. I think everybody likes to embrace issues important to them politically, and there are a lot of easy issues to embrace. Twenty years ago, when I started talking about this, it was dangerous to speak publicly in favor of legalizing pot.

Nobody needs to vote for me. I can’t be fired. I just raise my ideas about this because I like to share truth and I don’t like to see our country embracing lies and being afraid.

There’s just not a lot of mainstream people who are well-known who are willing to say, ‘It’s time we stop arresting people for smoking pot.’ There’s more than Woody Harrelson and Willie Nelson that can speak out on this.

I support a legal marijuana campaign if the law is a public health law, it respects law enforcement, if it addresses the racism, and if it also addresses the civil issues.

Leafly: If ‘high’ is a place‚ it seems like visitation is up, as legalization is winning.

Steves: I think right now our country is at a point where there’s this rising tide of sensibility and there’s no way to turn it back.

It was scary when Washington and Colorado did it in 2012 because then the US federal government could have come in and crushed us—but it didn’t, which is amazing.

Now we have a critical mass and they just can’t do that, I don’t think they can get away with it. For one thing, there’s much tax revenue being generated. I love the fact that in my state alone there’s about $1 billion in cannabis revenue and about $300 million in tax revenue generated.

My governor, Jay Inslee, was not in favor of this, nor was the governor of Colorado when we legalized in 2012. Today, we know that in both states the governors are in favor. They’re thankful for it.

The numbers are in. It was our hunch that use would not go up, that teen use would not go up, that road safety would not be impacted, and that it would instead be a smart way to pull the rug from under the booming black market, and tax and regulate the heck out of it, and take that money away from gangs and organized crime and let it be legitimate businesses, and employ people in rural areas, and stop arresting people, most of whom are people of color.

My governor, Inslee—chatting with him about this—he said he’s thankful he’s not arresting 8,000 people a year. We have pretty much destroyed a booming black market. Now we have a thriving legal market and the government gets $300 million a year, plus we get to enjoy the freedom of smoking pot if we want to. There’s nothing bad about this.

The only thing bad that people think is, ‘Oh, now people are smoking marijuana.’ But they were in denial about the reality that people were smoking it anyways.

The fact is there’s not a reservoir of people wishing they could ruin their lives smoking pot if only it was legal. Anybody who wants to smoke does, and now we do it as a legal activity instead of an illegal activity, and I think that’s a good thing for society. 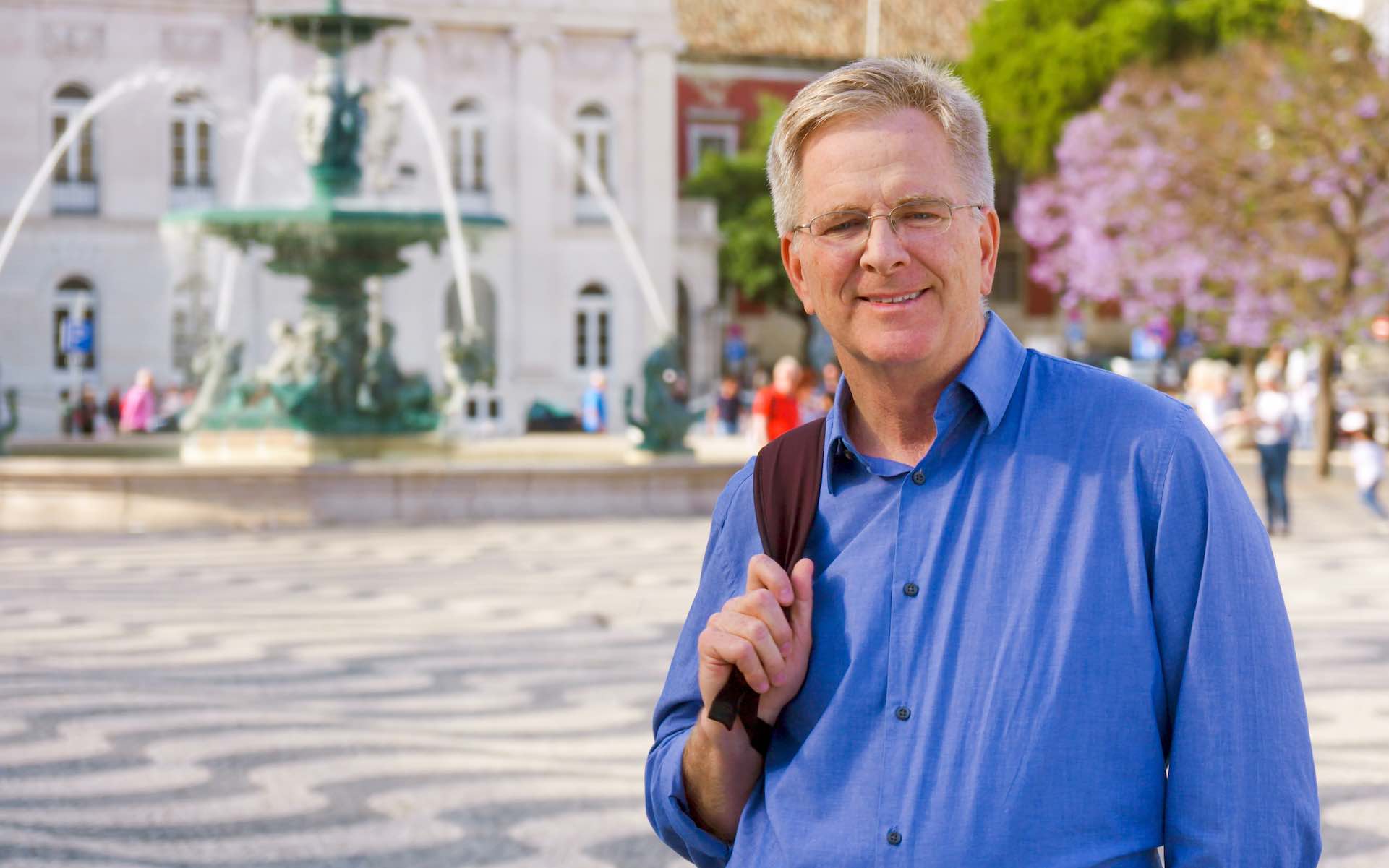 Leafly: What’s it like to take this message to a red state?

It just catches people by surprise. I don’t like to waste my time preaching to the choir. I want to reach the people who have really been raised to think this is devil weed and let them know it’s just not that big a deal.

I come from a state where it’s old news now. We’ve had it for eight years. It’s the same community it was before, we’re not arresting as many people, and I can move my bong from my cupboard to my bookshelf as a sort of declaration of independence.

Leafly: Do you see a rising tide of conservatives for legalization?

Steves: I wish conservatives were more intellectually consistent in their politics.

If I go smoke and drive and hurt somebody, they should throw the book at me, I’m clear on that. But if I can smoke responsibly, being considerate about the needs of my neighbors—it’s just kind of common sense for me.

I’d love to go to states where pharmaceutical companies are funding the opposition. Arizona was one that didn’t win a few years ago because pharmaceutical makers are understandably threatened by marijuana, That’s just not good—when people put their financial interest above our civil liberties, and poor people and people of color get arrested for it.

It’s hard to imagine right now—[tens of thousands of] Americans in jail for non-violent marijuana crimes and about 663,000 arrested for marijuana crimes each year when, in about half of our country, it’s legal for adult use or medical use.

It’s getting to the point where you can go to a little bed and breakfast in eastern Washington and have marijuana and then cross the border into Idaho and do hard time for it. This is ridiculous.

Leafly: What message do you want to carry to the business attendees at the ICBC’s June 9 virtual symposium?

Steves: I stay out of the business end of it, although I love being able to go into a dispensary and see all the great things, all the technology, and choices we have, and being able to buy it from a reliable source. I just keep the focus on the importance of defending our civil liberties and taking racism out of the equation.

Leafly: There’s this thread of good citizenship in all your work as a traveler, writer, business owner, and community member. How can canna-business people be good citizens?

Steves: There’s plenty of room to be a community leader and also a canna-business person.

I like that idea, because this is what I did at the very beginning of my advocacy: just confuse people with what they expect they’re going to be dealing with, and who this human being really is.

Here’s a guy they like, and they never thought they could like a guy who smokes marijuana. And I prove them wrong—Ha! For me, that’s a beautiful challenge.

The cannabis clubs in Barcelona and the coffeeshops in Amsterdam—they are model citizens on their streets. They know that some people who live upstairs don’t like noise at midnight, or others that walk by don’t like the dank smell of marijuana. And they respect that; in part, because it’s a nice way to not get shut down.

I think we can have a thriving legal marijuana industry and we can earn the trust of our society. And that we can then have home grow, public places to enjoy marijuana, and so on—if we just respect the fact that not everybody is going to embrace it like it’s god’s greatest gift to humanity, everybody has a different thought on it, and that we tolerate each other.