When people think of cannabis consumers, the first image that usually comes to mind is someone in their early 20’s—that fun time in life. But today’s older adults are the people who created the foundational cannabis subculture for the industry that exists today. And some of them never stopped toking! (Why should only one part of life be the fun time?) Others put it aside while raising children, then returned once their responsibilities let up. And still others know it as a wonderful remedy for their many ailments.

We caught up with some of our elder cannabis fans, getting their perspective on matters of today, and some great tidbits from times past. Read on to find out (or remember) what a ‘lid’ is, munchie memories of the ‘60s, and lots more. 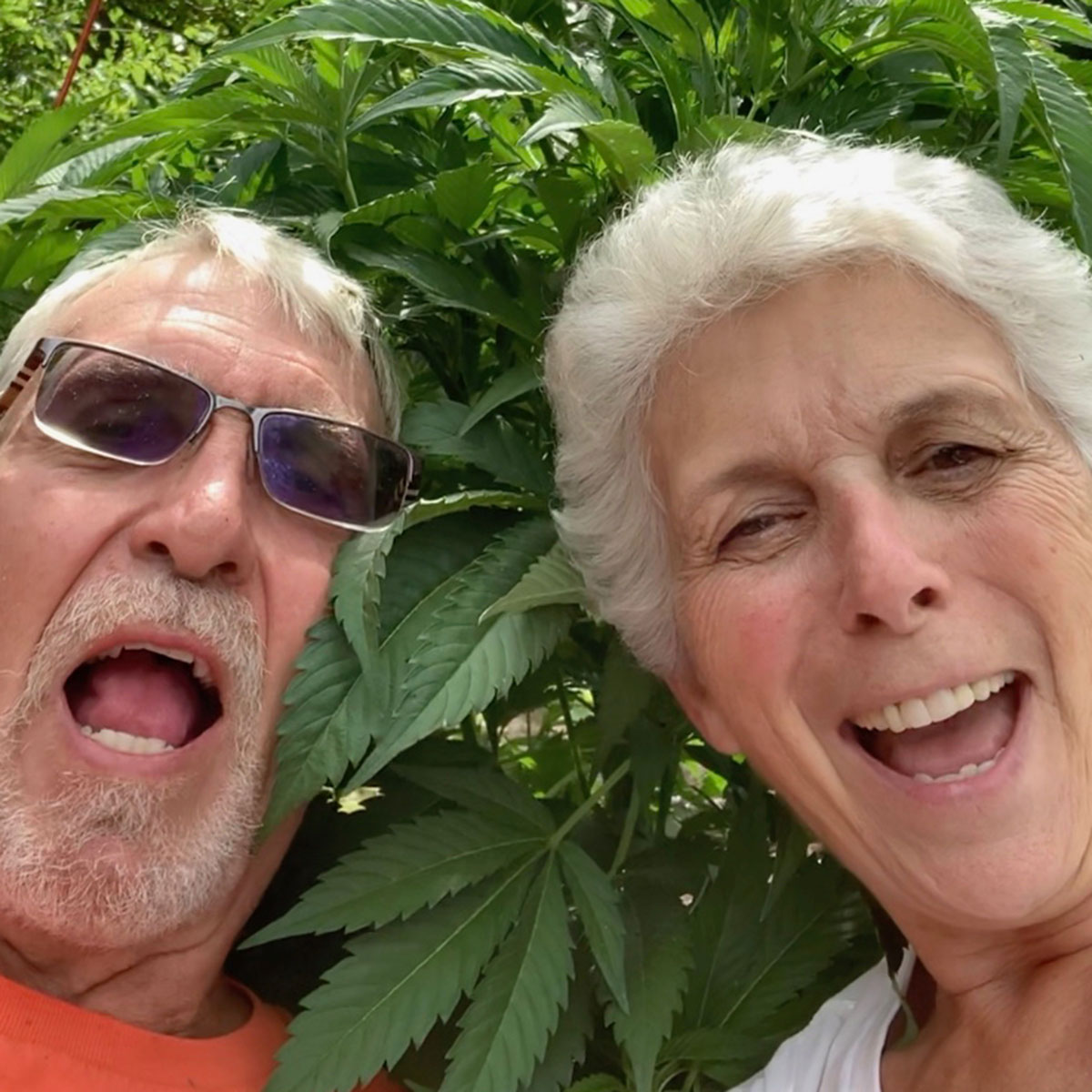 Paula and Ken are a married couple residing in Oregon, living in a picturesque country home with several towering cannabis plants growing in the yard. Ken reports that he’s been using cannabis for 50 years, mostly recreationally, but currently uses a CBD balm on his knees and back, as well as edibles for sleep.

However, Ken says that he also has a great time with it. “Cannabis lets you notice one form of sensory input and really let it all in. It makes me feel more comfortable in my own skin. Like I can’t dance, but when I smoke marijuana it makes me feel like I can—and I almost can!”

Paula’s mostly uses cannabis socially, saying, “When we have friends over I just have one hit on the pipe and I feel like I had three cocktails—we laugh and laugh, and it’s so much healthier!” They like using a pipe when friends come over, and often when they’re hanging out at home together in the evenings.

Since they grow their own cannabis, they’ve also got plenty to share. Ken makes a lot of CBD cookies for medical needs of loved ones; a friend of theirs actually used them to get off of opiates, now able to sleep through the night with only a cookie for aid.

Though they’re happy with the current state of canna-affairs, they are shocked at the prices of cannabis these days. Ken remembers that he bought a lid, which was slang for about an ounce of cannabis, for $10. He says, “People now call it the ‘good old days’ because of that, but they weren’t the good old days—it was illegal! We were always worried, and now you drive down the road and there’s signs—‘NEED WEED?’—I’d have thought that was heaven back then!” 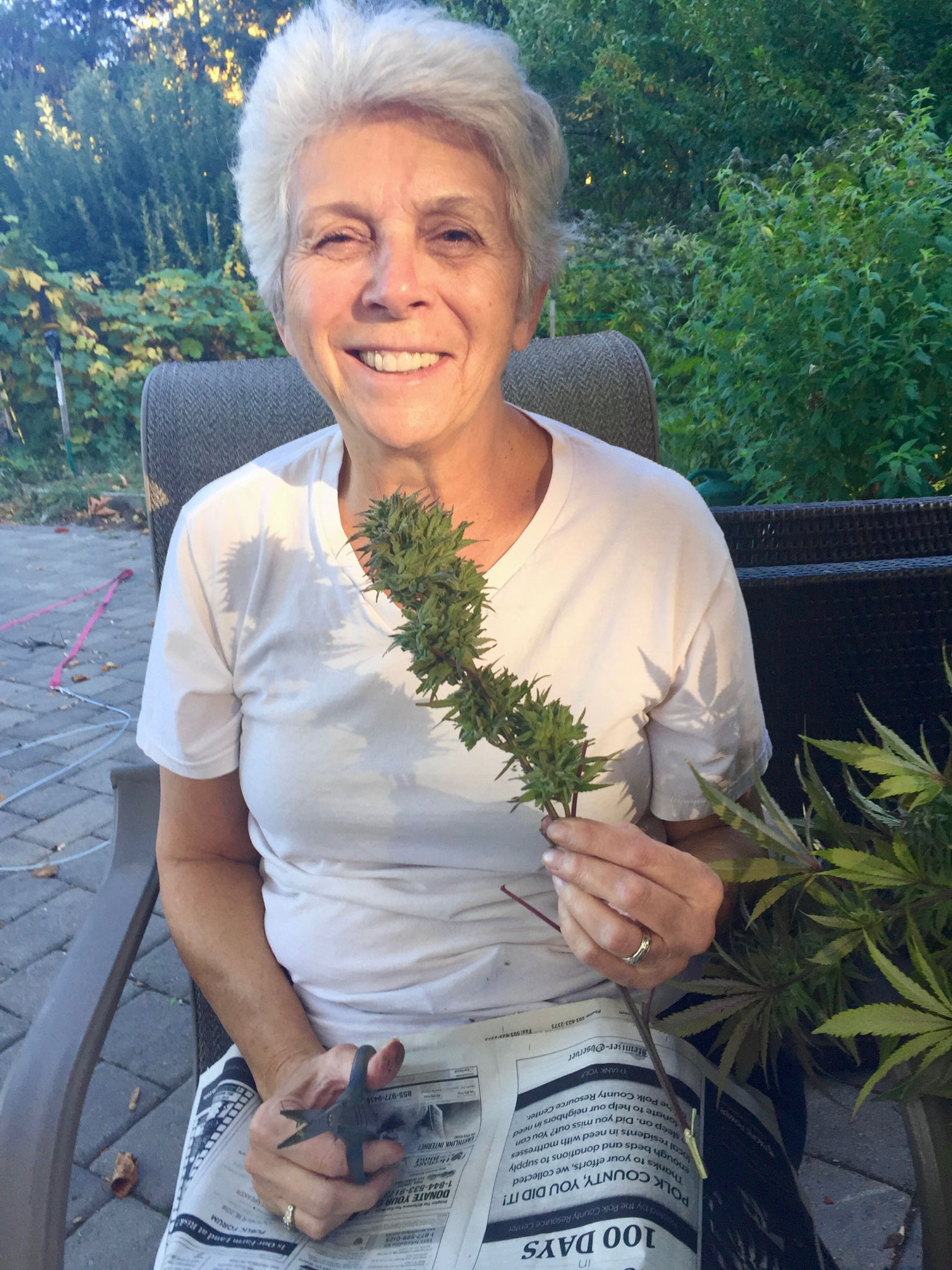 Ken started smoking in college, during the ’60s, sharing that people mostly carried joints at the time, but sometimes at parties someone would bring out a bong. Though Paula and cannabis didn’t hang while her kids were still growing up (picking it up again when she met Ken), she was introduced to cannabis while she was in college, in 1966. She told us that it was usually 8-10 people sitting around listening to all the great music from the 60’s, just talking and laughing.

When asked for their favorite munchies of yore, the two were quick and decisive in answering. Paula’s was rather inventive: a can of Spanish rice and a can of refried beans, served on a tortilla (warmed directly on the stove burner). And Ken’s: “Jack in the Box’s hot apple turnover, vanilla milkshake, combined!” He shared that once the guy at the Box asked if they had the munchies and they responded, “If it weren’t for munchies, you wouldn’t be in business!”

Though Paula’s kids didn’t know her as a cannabis fan growing up, legality and adulthood have made it a family affair. The first time they all did it, they’d gotten together for dinner and Ken said, “Want to smoke a joint before dinner?” And one of the adult children replied, “This is just too weird.” But they did it nonetheless—and it was a great experience.

They say now it’s pretty normal, passing a pipe around while hanging out playing games or vaping at Christmas.

Carol is another person who blends medical and recreational cannabis use, but she says these days it’s mostly medical. Between a bad back, symptoms from surgery, a couple of collapsed discs, a hurt rib, arthritis, and more—cannabis has got its hands full.

“I’m stable, and part of it is because four years ago I was able to get my medical card and become legal,” Carol said. “It helps everything, including the depression. But mostly what it does is helps me by giving me something I can concentrate on so that I forget about the pain.”

She started enjoying cannabis in 1961 while living in New York. She had an easy connection to get cannabis until she left the city in 1981, but since she was in nearby New Jersey, she’d just take a quick trip into the city to get what she needed.

That stopped around the turn of the century, leaving her with only sporadic cannabis connections—but her passion for poker saved the day. After she joined a game with some young people—“poker kids,” as she fondly calls them—she “found a source for some supply.” Then, four years ago, legal medical cannabis really started hooking her up.

Carol recalls the first time that she tried medical cannabis. “It was so intense. The first day I came home and smoked on my porch legally, the first thing I did was to go inside and write a letter to the dispensary asking if they had a position in the garden.”

She says she was blown away that there are people fighting for legal cannabis. “This magnificent movement around the country to make nature’s miracle pain medicine available…I never thought I’d live to see it happen. It is just wonderful.”

And she wound up becoming one of those people fighting for legal cannabis. After discovering that she went to high school with one of the organizers, she joined the New Jersey cannabis community last November. She went to a social event with the group and it was the first time in 20 years she had smoked with people who were used to smoking.

“For the first time, I was in the company of people who were not only using marijuana medically, but were fighting actively for homegrown and other aspects of legalization that should be the right of everyone, and isn’t.”

They gave her her very first dab, and she proved to be a champion. “I took an enormous inhalation and everybody was astonished and labeled me ‘Sturmella Iron Lung’ on the spot,” Carol said. (‘Sturmella’ is a nickname that comes from her maiden name, ‘Sturm.’)

Though friends her age are generally tolerant of her use, she doesn’t yet get to share her love of cannabis with many of her peers. “Younger people always think I’m cool because I’m very forthright. The older people…I don’t know.”

She told us that her friend was dying of Parkinson’s disease, and she wanted to help her with cannabis, but her husband refused to consider it because he saw Reefer Madness when he was young, and now nothing’s going to change his mind. “That is the danger of misinformation of that kind,” she told us wistfully.

“I love, love, love the people I’ve been meeting through [cannabis],” she told us before emphasizing how much Marijuana Mommy (Jessie Gill) has helped. Together they got Carol off of painkillers by using specific strains for specific problems.

Without the drug-induced lethargy, she’s been able to get moving again. “It’s gotten me up and out of bed and it’s got me doing things again; it’s gotten off the weight I put on from sitting around doing nothing—and I’m not going back.”

She’s lost 55 pounds since cannabis helped her quit the sedentary life four years ago, telling us that she has a normal BMA “for the first time this century.”

But there are also definite elements of “recreational” use at play, she shared with happiness in her voice. “[Cannabis] heightens music, and it makes me feel good. It makes me feel alive,and it makes me want to get up and out of bed. And at this point that’s what I need.”

Kate (who preferred not to give her last name) started smoking in the 1970s and hasn’t stopped since. She says she used to smoke sticks ‘n stems before she moved to NYC in 1976 and discovered sensimilla, and it was a whole new experience. Kate still spends most of her time in New York, where cannabis is only legal for medical use, so continually getting high-quality cannabis can be an issue.

Luckily, she met that hero of a dealer who introduced her to sensi; and when he left town he passed her onto another. The next dealer did the same. And the next. And now, nearly 44 years after arriving in NYC, she shares that this chain remains unbroken, even though her last connection died of cancer.

“On our last phone call, he said, ‘And don’t forget, you can always see PJ’. Here’s this guy, dying of cancer, and he’s worried about me and my pot connection!” Kate said.

Kate says she’s not too worried about getting caught. “You walk in Manhattan and you smell weed all the time. It’s not enforced, and, if anything, you get a ticket. Or, I should say, it’s not enforced if you’re a white person, to be honest with you,” she shared, with irritation in her voice. “Whenever I read about people getting busted for marijuana smoking, it’s disproportionately people of color. I’m white and I’m old—so I’m not going to get busted.”

When asked what she likes about cannabis, she replied, “I like the high. And it’s different from drinking. I can’t say that I’ve ever gotten so stoned that I fell down, which happened to me drinking in the past.” She enjoys cannabis a few times a week, loving the ritual of rolling up a joint, the puffing, and how it looks sitting smoking in the ashtray.

Kate also lives in a building where she’s not worried about anyone complaining about the smell associated with her hobby, as she resides in an artist’s community. In fact, many of her neighbors smoke, too. Since most of the tenants move in, love it, and never leave, she says it’s become a “naturally occurring retirement community.” She enjoys having neighbors who are like-minded peers, sharing that she enjoys smoking with a couple different neighbors her age, as well as flying solo.

All-in-all, cannabis life for Kate hasn’t changed all that much since the 70’s, though she does enjoy a vape pen when she goes to the Jersey Shore, where the houses are close together and the smell of a joint is too conspicuous. She also reminisced about one stoney pastime from back in the day, one that we’d have loved, too: ironic showings of the 1936 anti-cannabis propaganda film, Reefer Madness, which played at midnight.

“We were probably stoned out of our minds, but we thought it was hilarious.”

Meg Hartley is an Alaska-grown cannabis writer and advocate who now lives and loves in Long Beach, California.

Want to beat quarantine boredom? Here are games to play while high.