(This story has been updated to reflect the number of greenhouses in use by Autumn Brands.)

(California Marijuana Notebook is a regular column that delves into the complicated issues surrounding the state’s immense cannabis market from the vantage point of Marijuana Business Daily Senior Reporter John Schroyer. Based in Sacramento, he’s been writing about the cannabis industry since joining MJBizDaily in 2014.)

North of Los Angeles in Santa Barbara County, the “green rush” atmosphere is alive and well.

Make no mistake: Local businesses are experiencing growing pains – as are cannabis companies in much of California.

Despite setbacks and hurdles, the longtime agricultural community in Santa Barbara embraced the marijuana industry – especially on the cultivation side – and that success has created both snags and promising business opportunities. For example:

The countywide cap is “kind of infinitesimal for the potential of north county, but it’s still (an expletive) ton of weed,” one local industry insider observed after the board’s vote.

But that isn’t deterring many of the already imbedded local growers and other companies from tapping the potential of the famous seaside county and wine region. Rather, it’s arguably the opposite.

Every industry source who spoke with MJBizDaily exuded optimism, a sort of elation that tends to come when business is on a solid uphill track.

Plenty of local MJ farmers paid close attention as the Santa Barbara County Board took its recent actions to rein in cannabis cultivation, and several agreed it was important.

But many also noted restrictions aren’t likely to undercut existing grow operations unless something else in the licensing system goes seriously awry. 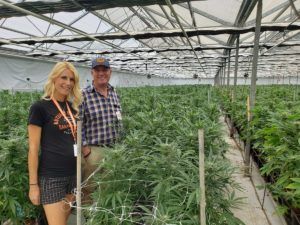 “We were running in the red for a while in 2018. Essentially, this was Year One … Right now, demand is extremely solid.”

Shelton and others said wholesale marijuana prices heading into the summer were much better than expected, and some even have standing orders for product for the next month or so.

But this winter, once outdoor harvests begin making their way into the supply chain, that’ll probably drop to $600-$800, she added.

Business is good enough that, once she gets her county land-use permit, Shelton is planning to expand her current marijuana-growing capacity by adding another greenhouse to the three she’s already using. 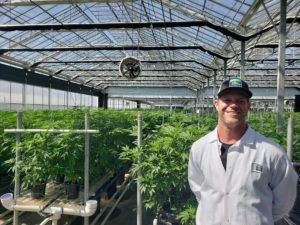 That’s also true for Graham Farrar, who has a 150,000-square-foot operation Glass House Farms near Shelton’s.

He’s working on expanding his cultivation footprint by 350,000 square feet, building out a new extraction lab and opening a retail shop in the city of Santa Barbara, which will be one of just a handful in the entire county.

“We’re sold out for six weeks ,” Farrar said of his greenhouse-grown marijuana. “People are putting down deposits.”

He believes the average wholesale price is even higher than what Shelton estimated.

Farrar noted top-shelf flower can fetch as high as $4,000 per pound and lower quality about $800 per pound.

Farrar said he’s “excited” for how he sees the market blossoming in coming years and boldly predicted that another third of California counties and cities will decide to legalize and regulate the industry within 18 months. (For context, only about a third of the localities in the state currently allow for any type of commercial MJ business.)

Even a high-profile raid on a licensed farm in June hasn’t put dampened locals’ spirits, because it was basically an open secret that the operator – Luis Cisneros of Organic Green Farms – wasn’t playing by the book.

Farmers who play by the rules enjoy a solid working relationship with local officials such as the sheriff, local industry insiders said.

“They were black-market guys who came up here like a year ago,” said Mike Palmer, a co-owner of Pacific Stone, a Santa Barbara cannabis farm and brand.

Baird and his partner are awaiting local and state manufacturing permits, but once they get those, they plan to begin mass-producing water-soluble tinctures designed to be added to drinks.

In the meantime, they’ve already been garnering market share in the hemp-based CBD space.

What Green Rush Alliance illustrates, however, is that plenty of business openings exist in places such as Santa Barbara County.

Many municipalities within the county are either working on their own ordinances to govern MJ businesses or are in the process of granting licenses, as is the case for Baird and Farrar’s Santa Barbara retail shop.

The same is true for Jared Ficker, a partner with Sacramento-based Axiom Advisors, a political consultancy that focuses largely on marijuana clients.

Ficker recruited a partner and started Herbl Distribution Solutions, which only now is poised to open a hub in Goleta after having launched two other hubs in Santa Ana and Santa Rosa.

Between those operational hubs, Ficker said, Herbl did $13 million in sales in the first quarter of 2019 alone, and he believes that number doubled in the second quarter.

“There’s more production today than the market can absorb, which means prices should be diving. But they’re not,” Ficker said of the current wholesale atmosphere.

(Click here to read the previous installment of this ongoing column.)

Manitoba weighs on-site cannabis consumption, but not for smoking

Massachusetts Has Over 600,000 Weed Vapes Sitting Around from 2019’s Vaping Crisis