If the cannabis genome map for various strains are already published, nobody can patent them—and lock them up. (Gillian Levine for Leafly)

n the late 1990s, Kevin McKernan worked as a research and development manager on the Human Genome Project (HGP), at the time one of the largest scientific research projects in human history. That massive effort was publicly funded, but by the time the work was successfully completed, up to one-fifth of the human genome had been privately patented.

Vowing not to let the same fate befall cannabis, McKernan decided that the best way to circumvent future attempts to patent all or part of the plant’s DNA would be to create a genome map for a specific strain and put it in the public domain.

So in 2011, McKernan and his newly formed company, Medicinal Genomics, mapped the DNA of a high-THC strain called Chemdog. After making the data publicly available using Amazon’s EC2 cloud computing system, McKernan informed the US Patent Office so the federal agency would have that information on hand if and when an individual or corporation applied for a patent covering the same ground.

By 2018, Medicinal Genomics’s ability to map the genome of cannabis strains had advanced greatly. So when a crypto currency gave McKernan’s company 150 DASH (approximately $67,500 at the time of the grant) to map a strain called Jamaican Lion, the genome was assembled and publicly available within 60 days of the payment.

Blockchain technology didn’t just fund the effort. Jamaican Lion’s actual genomic information was also encoded directly into a blockchain. That made sure the data was published publicly and securely, with a globally recognized timestamp, in a way that can’t be edited after the fact. 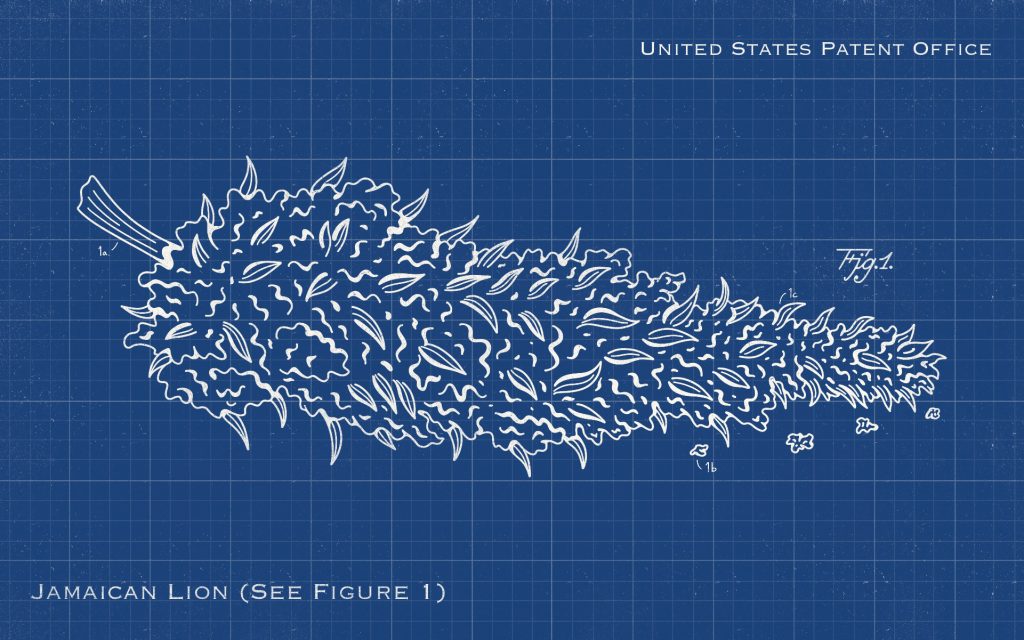 McKernan specifically selected Jamaican Lion, he told Leafly, “because the grower demonstrated to us a fairly detailed forensic trail of documentation to back his claim.” Including a second-place finish in the CBD category at the 2011 Cannabis Cup in San Francisco, and contemporaneous results from Steep Hill Labs in Oakland confirming the strain’s cannabinoid and terpene content.

Which claim will prevail

That paper trail is important because it predates the patent applications of Biotech Institute LLC, a shadowy cannabis science company profiled extensively in Part 2 of this special report. Which means that if Jamaican Lion can be proven to have exhibited the same properties described in Biotech Institute’s first patent at least a year prior to when the Biotech patent was issued, then that would effectively invalidate Biotech’s claims.

But that’s far from a sure thing. Cannabis patent law remains in its infancy, and the plant remains federally illegal in the United States, so it’s pretty much impossible to predict how the government will weigh a claim based in part on a High Times sponsored harvest contest.

Above: Kevin KcKernan outlines his company’s open source work on the strain Jamaican Lion, at the CannMed 2019 conference.

The feds will ultimately decide

“The problem the US Patent Office is having—as they comb through cannabis patent applications—is that it’s hard for them to gauge what ‘prior art’ really means,” McKernan said, “because there’s been so much prohibition and censorship in the field.”

McKernan thinks Jamaican Lion has a solid case to subvert BioTech’s patent, but offers no guarantees. He believes the facts are on his side, but also notes that “there’s a presumption of validity once a patent issues so overturning this requires ironclad data.”

In the end, according to McKernan, it will come down to how a government bureaucrat with limited understanding of cannabis weighs the evidence.

If Medicinal Genomics puts their DNA data in the public domain instead of selling it to Big Ag or bringing it to the patent office, then how do they make any money?

According to McKernan, they “produce and sell genetic tools that enable growers to improve yield, transparency and safety.” Those tools include genetic tests for plant and human pathogens on cannabis; and portable genetic tests for cannabis male detection, CBD/THC genetic detection, powdery mildew, Botrytis, Fusarium, and other pathogens. “We don’t run these tests ourselves,” he said. “They’re all either run at the point-of-grow, or we enable any capable laboratory to run them around the world.”

While McKernan is clearly bullish on his start up’s financial future, he also takes pains to distinguish Medicinal Genomic’s business practices from those of Phylos Bioscience founder Mowgli Holmes (see Part 1 of this report), who spent years claiming to “fucking hate Monsanto,” only to turn around and make a public declaration of his company’s intention to be bought out by Big Ag.

“Phylos was a premeditated data harvest play,” McKernan said, “which happens in every market genomics marches into.”

First, McKernan explained, a company acts as a tech savior, “then it offers low cost crap genomic sequencing the market is too unfamiliar with to quality control.”

Finally, McKernan said, these companies sweep up their clients’ data and use it to compete against them.

“We alerted the cannabis market to this many years ago when it was clear Phylos was not making data public that they claimed they would,” McKernan said, “but it fell on deaf ears at the time.”

“Maybe Phylos didn’t have the same sense of urgency as their clients,” McKernan says. “Did any samples submitted to Phylos fit Biotech Institute’s first patent description? That patent was under examination during the timeframe Phylos kept data private. Had they been doing what they promised customers (protecting them from patents like Biotech LLC by promptly putting data public), they may have succeeded in generating prior art the examiners could have seen.”

Mowgli Holmes countered that the delay was due to the “huge amount of manual work” involved in formatting all that DNA data and uploading it to the National Center for Biotechnology Information’s databases, which are federally maintained, and serve as “the recognized public repository for genomic data.”

“We also never had any reason to rush to do it,” Holmes adds. “ Making the data public wasn’t some obligation that we were under. It was an extra thing we decided to do because we saw that it could serve a valuable purpose as patent-blocking prior art.”

“The idea that we were supposed to rush to make it public came from a competitor whose approach to business is to post constant attacks on social media,” added Holmes. “He planted a lot of false notions about the value of the data and formulated this idea that we were secretly hoarding it for our own proprietary reasons. It was a funny idea, because he’s a geneticist and he knew full well that the data wasn’t useful to us.”

McKernan maintains that Phylos’s collection of DNA data is extremely valuable for achieving the company’s twin goals of starting an in-house breeding program and getting bought out by Big Ag. He also says that despite all the recent controversy, Mowgli Holmes may still come out on top.

“I suspect Phylos has a very valuable DNA library that they collected from customers and likely have more sequence than what is public. The field of genomics produces exceptional gains in the Ag markets. You can make a few pivots and still strike gold. They are assembling a team with more AgGenomics experience, so I would not write them off.”

Several Illinois Dispensaries Have Already Run Out Of Recreational Weed