CANNABIS CULTURE – “It’s been five years since Prop 64. Time is up.  Enough is enough. Governor Newsom. Nicole Elliott, state legislators, labor unions —It’s time to answer this call of civil rights. There needs to be a new intention to have social equity owners and workers in our communities, thrive and be prioritized.”

Representatives from the front lines of the failed war on drugs rallied on the front steps of California’s state government to demand reform to current cannabis taxation structures and an end to the state-sanctioned tragedy that is the war on drugs.
The rally took place on Thursday January 13th.
The two cohorts represented reflect Black and brown cannabis operators as well as legacy craft Emerald Triangle farmers. Both were inordinately harmed by the misguided War on Drugs. The supposition driving yesterday’s rally is that California’s broken tax scheme is the next iteration of that assault, a War on Drugs, 2.0. The groups called for a cessation of the excise tax on equity operators and a suspension of the cultivation tax for all cannabis growers.

Amber Senter, a rally organizer as well as co-founder, executive director and chairman of Supernova Women was the first speaker of the day.

“We’re here today because the craft cannabis industry and social equity businesses in California are in crisis and on the brink of collapse,” she said. 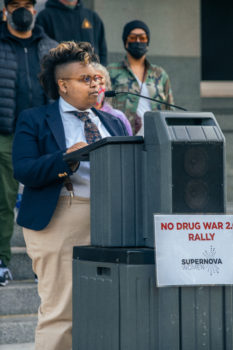 “For 40 years, Black and Brown people were locked up, detained and denied freedoms for the same activities that are enriching the purse strings of cannabis corporations today. Emerald Triangle legacy farmers have also suffered because of the failed war on drugs. Not only has the state fallen short on its promises to right the wrongs inflicted upon communities impacted by the war on drugs, but it is also perpetuated for a regressive war on drugs 2.0 through oppressive taxation, which must end. This is our cry and plea for help,” Senter said.

Santer went on to highlight the hypocrisy of current cannabis industry realities in California. “We were deemed essential early in this pandemic. Where’s our essential relief and our essential aid?  Our industry and our businesses are worth saving.” 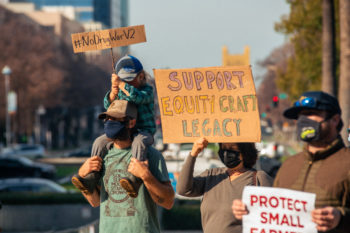 Genine Coleman, executive director of Origin’s Council, a statewide advocacy organization serving the historic cannabis farming regions of California, had this to say, “Cannabis farmers are faced with collapsing wholesale prices, barriers to market, retail access, and a completely unsustainable tax structure. This has created the perfect storm for economic upheaval within our historic rural producing communities. Legacy operators who have had both the opportunity and the courage to step forward are losing both their businesses and their land holdings at an alarming rate. California is at risk of losing this world-renowned agricultural heritage and scores of regulated businesses. Until such time as the state legally recognizes us as farmers and cannabis as an agricultural crop, we’ll be operating under a legal framework premised on prohibition.” 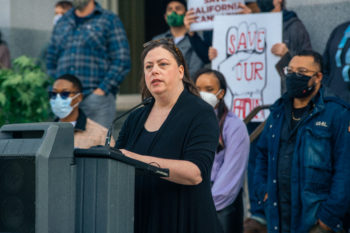 During her speech Coleman pledged support for Senator Mike McGuire, who she said is committed to introducing legislation to eliminate the flat rate cannabis cultivation tax in order to support the survival of the legacy farming communities of California. “We call on Gov. Newsom and the Legislature to support equity retailers through suspending the excise tax for these businesses, ensuring their survival and incentivizing consumers to support those business owners most impacted by the war on drugs,” said Coleman.

Representatives from independent  Cannabis Retailers also spoke, Kika Keith owner of Gorilla Rex Wellness Co., the first black woman-owned equity dispensary in Los Angeles. Keith delivered a passionate address focused on her own journey in cannabis and the questions she has for Governor Newsom.

“Being raised in south central Los Angeles, I’m a firsthand witness and survivor of the war on Black and Brown people. Governor Newsom is why we’re standing here and we’re talking to you at the State Capitol. We have had enough of your empty promises!

Six years ago, as lieutenant governor, you told us the purpose of marijuana legalization was social justice, to right the wrongs of the abject failure of the war on drugs in the United States of America. You framed your support for legalizing cannabis as a move for racial justice and economic empowerment.

State of California, we are tired of the rhetoric and all of your empty promises.  How do we keep getting overlooked?  There is a surplus in the budget of over $45 billion, and it’s time to back your words with the budget!  You have repaired no damage as you collected billions of dollars in cannabis taxes.  Where is the reinvestment dollars in my community? Where are the jobs for Black and Brown people devastated by drug felonies on their record? What is the recompense for my brothers and sisters who have lost their lives?” 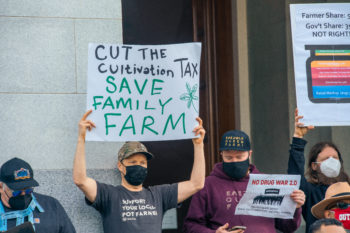 Keith told the crowd her pathway into licensure took over three years and left her $400 thousand dollars in debt due to astronomical taxes and bureaucratic delays. “When we were open on Crenshaw Boulevard for four months, we had a state excise tax bill above $140,000, another $135,000 to the city, not to mention a nine and a half percent tax that goes to my customers, the very community that is intended to be served by equity. Thirty four and a half percent of taxes is unjustified,” She said. “This egregious taxation is unreasonable and is the direct antithesis to social equity and social justice.”

For more information (and to get involved) follow these links:

Cannabis on Canvas – Highlighting the Beauty of Flower | Cannabis Culture