Mary Jane Rathbun was in the midst of baking when she heard a knock on the door of her small apartment in the Castro district of San Francisco. The then-60-year-old opened her home to a young man intent on buying some special brownies. By this point in 1981, Rathbun had been selling pot brownies for so many years that cannabis and cocoa were familiar scents in the halls of her building. But when the man revealed himself as an undercover officer, she replied, “Oh shit.”

The report from that raid listed 50 lbs of flour and sugar, 22 dozen eggs, 20 lbs of cannabis and 35 lbs of margarine. A furious Rathbun was later quoted as saying, “The narcs may not know any better but that was the finest quality butter!”

This was the first of three arrests for Rathbun, who continued defying the law by baking thousands of buttery cannabis brownies until just before she died on April 10, 1999. While headlines at the time painted “Brownie Mary” as a sweet and sassy grandma giving away pot-infused confections to the sick and dying, the real Rathbun was so much more.

Born Dec. 22, 1921 in Minnesota, she left home at the tender age of 13 following a violent run-in at school. “She struck back at a nun who caned her and got in a few good licks herself,” wrote the New York Times in 1996. Smart and feisty, Rathbun soon earned a living as a waitress and held down her own apartment in an era when unmarried women did no such thing (and let’s not forget she was still a child). Her sense of civil justice was ignited early—in her later teens she joined protests for miner’s rights throughout the Midwest. She also openly advocated for reproductive rights in 1947, long before second-wave feminism of the ’60s and ’70s.

A move to San Francisco during WWII—dubbed by some as the mecca of civil disobedience—brought her to a USO show where she met her soon-to-be-husband, divorcing him a scant few years later. They had a daughter, Peggy, who gave Rathbun the cannabis leaf pin she wore to each of her trials and every subsequent media interview. Peggy was tragically killed in 1974 at the age of 22 by a drunk driver.

It wasn’t long after Peggy’s death that Rathbun began selling pot brownies for profit. A career waitress in her late 50s with no formal education, family or financial resources, Rathbun saw the writing on the wall and sold brownies to build up a retirement fund. And sell she did: some estimates say she turned over 600 brownies a week at $20 per dozen. 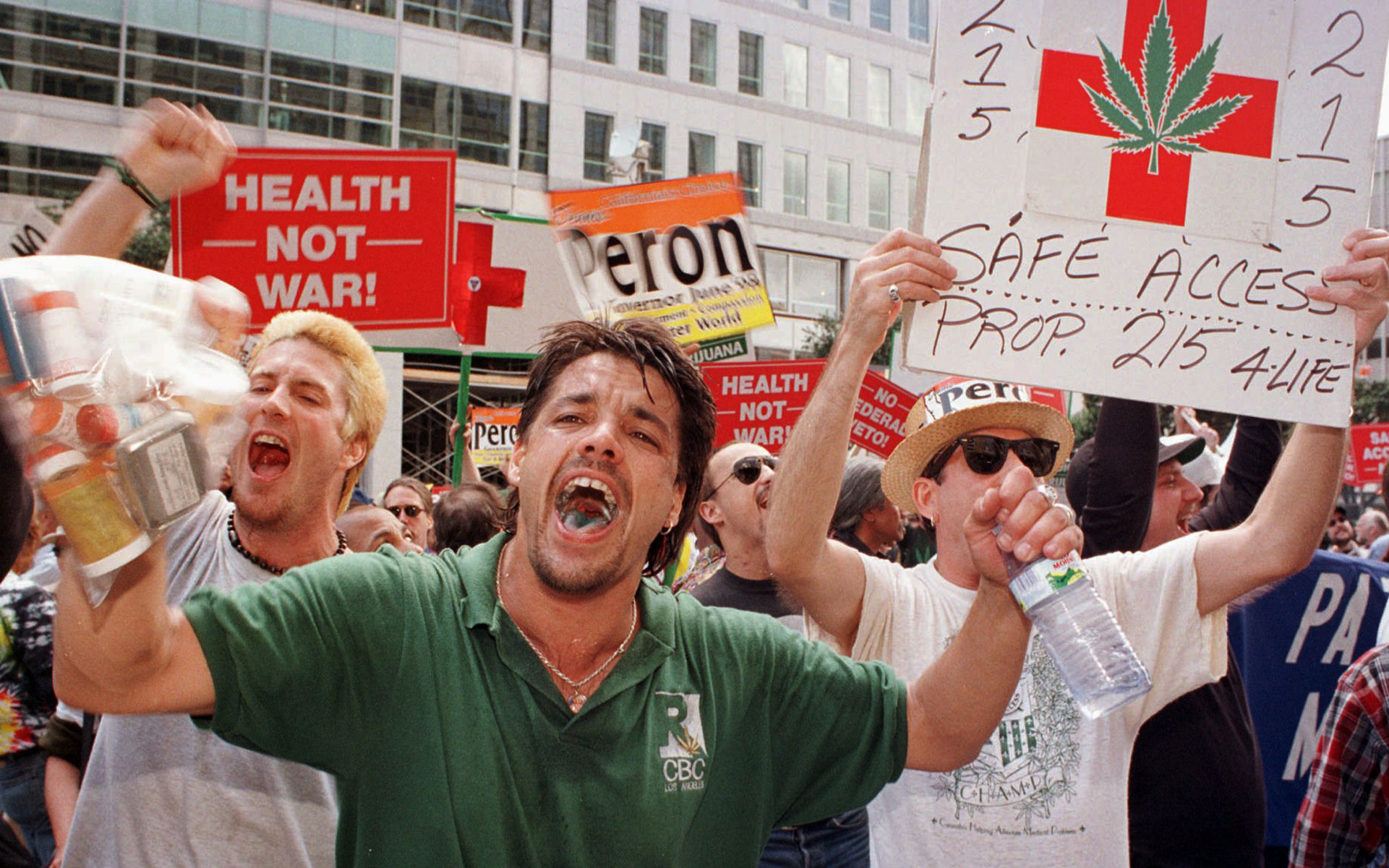 Babaji Zeiger, center, holds a bag in his right hand contaning his prescription medicine he takes for AIDS at a rally opposing a federal lawsuit which seeks to close clubs that distribute marijuana for medical use in front of the Federal Building in San Francisco, Tuesday, March 24, 1998. Zeiger said he smokes marijuana to help him cope with pain and nasuea from AIDS. (AP Photo/Thor Swift)

While her culinary and sales savvy was on-point, her marketing methods were not: hand-made flyers advertising “magically delicious” brownies eventually caught the eye of local police. (Although some speculate a disgruntled customer reported her.)

After that first arrest in 1981 she was sentenced to 500 hours of community service which she fulfilled with the Shanti Project, one of the first AIDS support organizations. The significance of Rathbun’s sentence coinciding with the early days of the AIDS epidemic cannot be understated.

Suddenly, the lifelong civil activist was surrounded by young people rapidly dying by the thousands, and no one knew why. First known as GRID (gay-related-immunodeficiency disease), patients at San Francisco General’s overcrowded AIDS wards were heavily stigmatized and ignored, even by hospital staff afraid of catching the disease.

Not Mary Jane Rathbun, who went on to devote thousands of hours over more than a decade at San Francisco General, caring for patients she affectionately referred to as “my kids”, slipping them pot brownies to ease their suffering.

Not so long ago, a mature woman healing sick people with special herbs would have been labeled a witch. Rathbun’s Irish-Catholic mother may have known the story of Biddy Early, a 19th-century healer and “white witch” in Ireland who, according to The Irish Times, “was in frequent conflict with the Catholic Church, the medical profession, landlords, the police and the judiciary, which made her something of a folk hero”. Both Rathbun and Early died at the age of 77, and both were honoured as heroes by their local communities in spite of their run-ins with the law.

That a woman who baked goodies en masse was introduced to thousands dying of “wasting syndrome” is itself a little mystical. Loss of appetite resulting in weakened immune systems was the leading cause of death for HIV-infected patients.

While researchers were trying to figure out the disease and flooding patients with heavy treatments almost worse than the illness itself, Rathbun’s cannabis brownies helped stimulate appetites and stave off the nausea and side-effects of early protease-inhibitor drugs.

Eventually, selling brownies for profit ceased being Rathbun’s modus operandi—she had too many dying kids to save. In her compassionate baking heyday, from about 1984 to 1990, it’s estimated she made 1,500 brownies a month, funding the ingredients with her paltry social security cheques along with cannabis anonymously donated by local dealers.

With more requests coming in than she could possibly fulfill, Rathbun resorted to pulling names from a cookie jar. “Of course, people were dying all the time. Sometimes you would see her walking on the street, just crying for her ‘kids,’” said her late friend and fellow activist David Peron in a 1999 Toronto Star article.

While Rathbun was never tried as a witch, she did appear twice in court for cannabis. At her last trial in 1992, at the age of 70, she faced a serious charge of felony transport. Just like zealots at a witch trial, Rathbun’s prosecution allegedly whispered, “I’m going to kick this old lady’s ass,” proposing she be sentenced to five years in jail.

Armoured with her daughter’s pin and a well-known legacy of charity work, along with international fame as the “grandma who baked pot brownies for sick people”, the judge dismissed all charges. That same year, Rathbun testified to the San Francisco Board of Supervisors about the medicinal value of cannabis, which persuaded them to deprioritize arresting medical cannabis providers. They also unanimously voted August 25 as “Brownie Mary Day” which is still annually celebrated in San Francisco.

On her first namesake day in 1992, she stood in front of San Francisco City Hall with a crowd of her supporters, swung her arms into the air and said: “If the narcs think I’m gonna stop baking brownies for my kids with AIDS they can go fuck themselves in Macy’s window.”

Legend has it upon Biddy Early’s death, her magical potion bottle was never found. As for Rathbun’s famous brownie recipe, it also mysteriously disappeared. She had told the New York Times she wanted her closely guarded recipe sold to a major cake manufacturer as soon as cannabis was federally legal, with the profits used to buy “an old Victorian for my kids with AIDS.” But no one has ever found it.

Colleen Fisher Tully is a freelance writer and editor with recent work in Clean Eating, Today’s Parent, The Walrus and Local Love. She posts random thoughts on Twitter @colleenftully