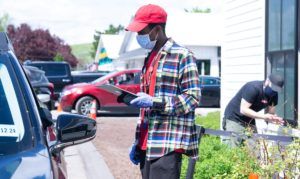 Recreational marijuana stores in Massachusetts launched back into action on Memorial Day, ending a two-month closure that might have collectively cost those retailers nearly $2 million per day.

The challenge, many said, was meeting that demand in accordance with Massachusetts’ rules for reopening, which allow preorders placed online or by phone to be fulfilled via curbside pickup.

CommCan President Ellen Rosenfeld described the Monday morning scene at her company’s recreational dispensary in Millis, southwest of Boston, as “controlled chaos” because of the technical issues with the store’s online ordering and point-of-sales software.

After working out a solution, Rosenfeld believed the dispensary was on track to serve a normal number of customers, perhaps 400-500 per day.

Rosenfeld estimates her company lost close to $2.5 million in revenue while the Millis dispensary was closed, but she expressed optimism about recouping that revenue in the near future.

“I feel very good – the pent-up demand is obvious, my parking lots are full, full, full.

“It’s just, to try to get the logistics to take care of this demand is challenging, to say the least. We’re not meant to be outside with a tablet, a debit reader, a mask, gloves, sanitizing after every transaction. Squeezing in between cars.

Other Massachusetts dispensaries reported a reduced volume of customers as a direct result of social-distancing measures.

“There’s an incredible amount of demand, but we are moderating that demand by only allowing a certain amount of appointment slots per half an hour,” said Brandon Pollock, CEO of Theory Wellness, which operates adult-use dispensaries in Great Barrington and Chicopee in western Massachusetts.

Pollock estimates his company lost roughly $10 million in revenue during the two months of adult-use closure.

Now, he said, Theory Wellness is working to scale up its curbside-pickup model to serve a typical number of customers.

“Because the customers are still out there, and we just need to figure out how to fulfill it,” Pollock added. 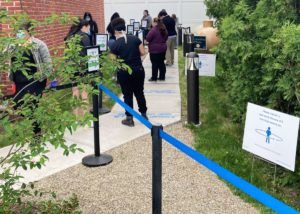 NETA’s location in Northampton, Massachusetts, on Monday served less than a quarter of the number of customers it might have seen on a typical, pre-COVID day, she said.

“There’s a lot of demand, and so I do think that people will certainly come out and shop,” Rositano said. “But the reality is, we’re operating in a very different environment where safety has to be the priority.”

At least one Massachusetts dispensary saw a big boost in order volume on Monday:

On the island of Nantucket, The Green Lady Dispensary received at least 1½ times the regular volume of orders as customers stocked up from the island’s only source of legal cannabis, co-owner Nicole Campbell said.

“I think that people would be really upset in the future if their access was cut off again,” she said.

As recreational stores in Massachusetts grapple with the ins-and-outs of coronavirus-era sales, it remains to be seen how the shutdown impacted adult-use cannabis supply in the state.

“There was a relative shortage of supply prior to COVID in Massachusetts,” said Ryan Crandall, senior vice president of sales at Norwood-headquartered multistate operator MariMed, which supplies some Massachusetts dispensaries.

“And I think shutting down the (adult-use) retail stores definitely stopped cannabis moving out the door.”

Theory Wellness’ Pollock believes the hiatus in adult-use sales came with a silver lining, giving Massachusetts’ recreational cannabis supply “a chance over the last couple months to catch up with demand more.”

Even though Massachusetts’ March shutdown paused new cannabis plantings destined for the adult-use market, NETA’s Rositano said her firm managed to preserve its existing inventory and is well-positioned to meet demand.

As a result, she said, NETA is lifting limits on how much cannabis customers may buy.

Spencer Knowles is vice president of sales and business development at Cambridge-based Sira Naturals, which he said supplies 29 of Massachusetts’ 44 adult-use retailers.

“I think it’s too early to say that the market is oversupplied across the board, because all the cannabis products are in all different forms,” he said.

“And I think everyone on the medical side proved that we could operate effectively through a very stressful time, and now it’s incumbent on everyone who opened (Monday) to show that,” he said.

Solomon Israel can be reached at [email protected]

COVID-19 and medical cannabis patients: What you need to know

How to read a CBD label