CANNABIS CULTURE – How a broken neck hatched a CBD empire.

“I discovered CBD because I was looking for a list of alternatives to taking pain meds as a spinal cord injury survivor,” says Matthew Gagne, founder of Flock Goods. Gagne had his life changed after a car accident in Dubai left him with a neck broken in ten places. 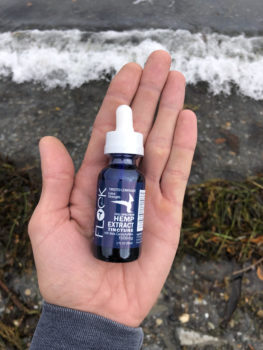 In 2016 Gagne moved to San Diego, California and experimented with CBD and THC to manage his nerve and arthritic pain. “I still have stretch marks in my spinal cord,” says Gagne. “I was basically internally decapitated. So, I have a lot of nerve damage down both my arms and my hands, and [CBD] helped me tremendously.”

Gagne says nothing is a “cure-all” but as far as the studies backing it up in relation to pain relief from nerve damage, nothing really comes close, especially with substances that have little to no side effects.

Before the accident, Gagne was a professional skydiver and says CBD will be a game changer for high impact sports like skydiving and wind tunnel flying. “It’s going to absolutely help for longevity. There’s a lot of discussion of the beneficial effects of CBD and brain injuries, especially high doses immediately upon impact,” says Gagne. “So, athletes that are always getting injured have a natural substance that they can gravitate towards. It’s not a cure-all but it’s a great insulator to all of the impact they are putting upon themselves.”

Post-injury, Gagne still leads an active lifestyle. “It’s a constant battle of balancing that abuse on my body that definitely causes further damage and inflammation, and just trying to be preventative at the same time,” says Gagne who takes CBD, like any other supplement. He started at 25 milligrams a day and now takes between 400 and 800 milligrams a day.

While sourcing products in San Diego, Gagne was alarmed by the number of inconsistencies. Gagne says he would find a product that he liked and then he couldn’t find it again, products that didn’t work, and products that tasted horrible. “Through the sourcing, I decided I could probably do better and do right by people and stand behind the products.”

“To sell anything under the guise of medicinal benefit that was anything other, is really wrong. And it happens too much in this industry,” says Gagne. “And that’s a big part of why I incorporated and went into business for myself so we can do things the right way and for the right reasons.” 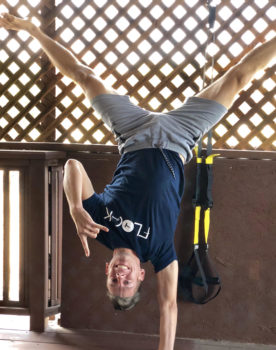 “Now we have momentum that I don’t plan on letting up, and it’s just moving forward aggressively in order to have a seat at the table amongst these gorillas that are coming in. You have all these large investors and big businesses that are spending literally millions of dollars of capital a quarter buying market share,” says Gagne “Their company’s not making money, but it’s a large investment group that can weather the storm and push out the small entrepreneur and the individuals who literally took it upon themselves to make enough noise and, and provide enough access, so people understood the benefit to create this industry and actually take it back.”

Gagne says the medicinal cannabis industry will most likely fracture into two different industries. One side will be pharmaceutical dominant, where all the different cannabinoids and terpenes will be isolated and put together for a desired effect. Variance in dosing will be much smaller. “Whereas the nutraceutical side, which is the other half of the industry, I believe, will remain more whole plant, more holistic, less processed,” says Gagne.

Nutraceuticals are food-based supplements that have medicinal value. “I think now people are becoming more cognizant of environmental stimuli, external factors, co-factors and their own responsibility in their own health and realizing just taking a pill or just taking a CBD oil isn’t going to fix you,” says Gagne.

CBD has been touted for combating muscle inflammation associated with many different types of ailments. “I do personally believe it helps with inflammation, but it won’t negate eating a bucket of fried chicken. You have to be taking other steps as well,” says Gagne.

The CBD offered by Flock Goods are full spectrum extractions, which they source from the United States. Flock also offers a zero-THC extract as well, but Gagne says they will be discontinuing it soon to focus mainly on whole plant full spectrum extracts. “As a small business owner, you kind of have to prioritize capital and it’s just not as cost effective to offer that when it’s such a small clientele in our market and I sympathize with people who have to take a drug test because that’s really the only reason to not just take full [spectrum]oil,” says Gagne.

In addition to selling different CBD products, Gagne’s website has a blog that offers information on positive lifestyle choices such as practicing emotional intelligence, intermittent fasting, functional fitness, and others. Gagne currently lives with his Dutch Shepherd on a riverbank in the state of Maine in a tiny house RV that he built himself.

“This has been kind of my life personified as a brand,” says Gagne. “And I’ve been stoked that people have been receptive and have liked it.”

How THC Crystals Are Made: The Complete Stoner’s Guide – Honest Marijuana