Opening Day back in the day: In Denver on Jan. 1, 2014, Sean Azzariti, a former Marine who served in the Iraq war and has post-traumatic stress disorder, became the first to buy legal adult-use marijuana in America. (AP Photo/Brennan Linsley)

Freedom rings in the Land of Lincoln Jan. 1 as all adults 21 and over can legally purchase cannabis from up to 33 medical dispensaries licensed to conduct adult-use sales.

See who the first people are in line are, what they buy, how long the lines get, and how long supplies last with the help of Leafly—we’re publishing several news updates all morning long on Jan. 1, beginning at 6:30 a.m.

To get ready for the launch, read our preview coverage:

Dive into Illinois’ cannabis tax rates and where that money goes.

And figure out how long recreational supplies should last, and how long it’ll take to meet the demand: Illinois dispensary supply levels—can they hold up?

For how we got here, read Illinois Just Legalized Cannabis. Here’s What Happens Next

Know before you go 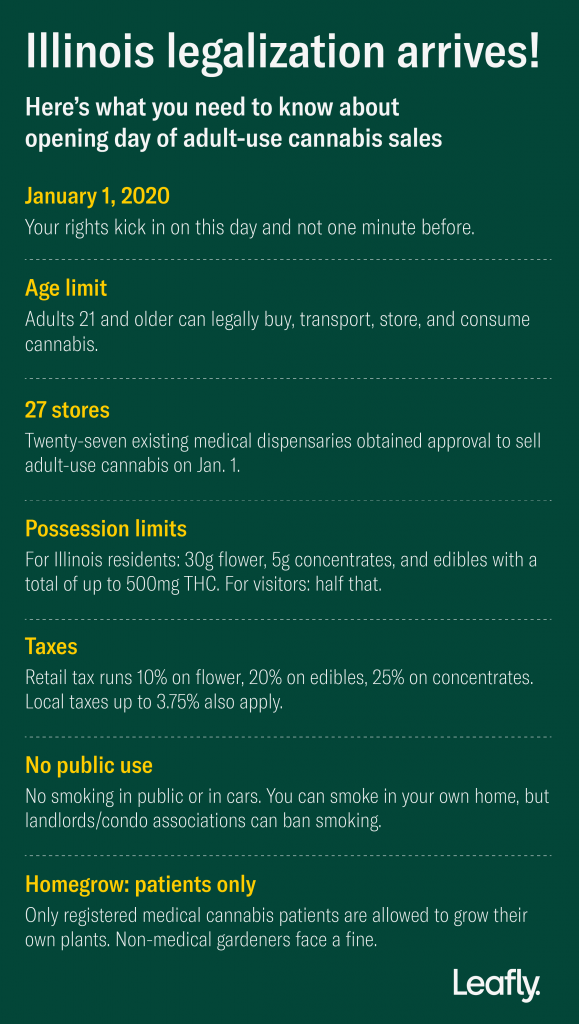 CHICAGO (AP) — Illinois’ governor granted more than 11,000 pardons for low-level marijuana convictions on Tuesday, describing the step as a first wave of thousands of such expungements anticipated under the state’s new marijuana legalization law.

The expungement process is a key part of the law, which takes effect Wednesday and made Illinois the 11th state to legalize marijuana for people 21 or older. When they crafted the policy, Illinois lawmakers said they wanted to repair some of the damage caused by law enforcement’s efforts to combat sale and use of the drug, particularly in minority communities.

Tomorrow, Illinois will become the 11th state to legalize and regulate adult-use cannabis.

But our state is today doing something that sets us apart: Illinois is putting equity first, clearing thousands of convictions and giving individuals & their families a new lease on life. pic.twitter.com/IgoOJCAlZj

Pritzker announced the pardons at a church on Chicago’s South Side. He said clearing the misdemeanor offenses from individuals’ records will make it easier for them to get jobs, housing and financial aid for college.

State officials estimate that 116,000 convictions involving 30 grams or less of marijuana, including for possession of the drug, are eligible for pardons under the new law. Illinois State Police are responsible for identifying those convictions and sending the records to the state’s Prisoner Review Board, which then forwarded eligible cases to the governor’s office for pardons.

Too high? Here’s how to help

Somebody’s gonna overdo it and get too high. It happens on every opening day. With edibles, remember: Start low, go slow. If you haven’t tried an edible before, try a low dose like 5mg or 10 mg, give it at least an hour to fully kick in, and enjoy the ride.

If you find yourself or a friend kinda out there, Leafly has a couple great resources.

The main thing to remember: Stay calm and breathe. This too shall pass. Nobody has ever died from consuming too much cannabis. 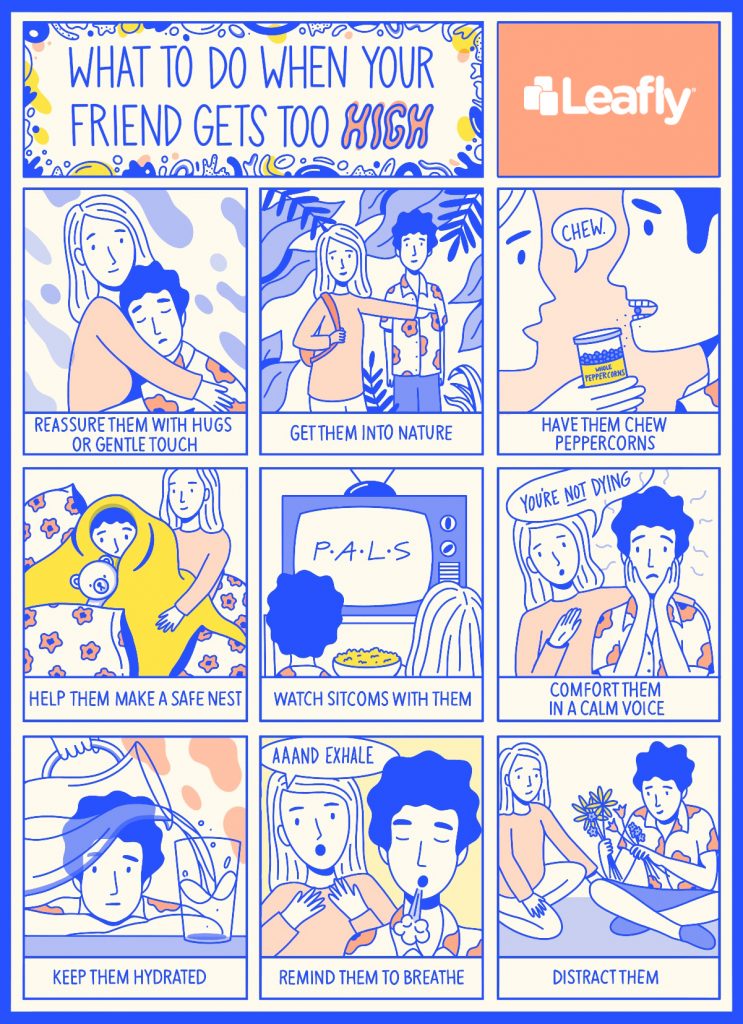 Pro tip: Don’t take it out of state

You think those Indiana state troopers are sleeping late on New Year’s Day? Think again. Prohibition states often like to make a statement by mounting emphasis patrols near the borders of legal states. In 2016, a federal court ordered Kansas state troopers to stop the practice of pulling over cars with Colorado plates just because they suspected their drivers of possessing cannabis.

If history repeats, there will be plenty of state police cars prowling the east-west highways near the Illinois border this week. Here’s the risk you run in those border states for a first offense. (Information courtesy of our friends at NORML.)

Illinois and Michigan share a border in the middle of Lake Michigan, and cannabis possession is legal for adults in Michigan, but crossing state lines with cannabis remains technically illegal. So don’t do it, even in a boat.

Leafly is the world’s largest cannabis information resource, empowering people in legal cannabis markets to learn about the right products for their lifestyle and wellness needs. Our team of cannabis professionals collectively share years of experience in all corners of the market, from growing and retail, to science and medicine, to data and technology.