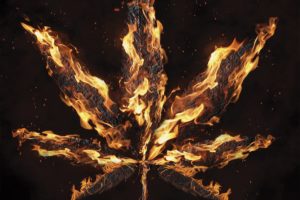 (This story is part of the cover package in the August issue of Marijuana Business Magazine.)

From wildfires to drought to hurricanes, a changing climate means more extreme weather for cannabis companies up and down the supply chain.

But no one is more directly impacted by these changes than marijuana growers.

Depending on where a grow operation is located, the challenge that climate change presents is different.

“There isn’t a single region that isn’t experiencing something,” said Ben Gelt, chair of the Cannabis Certification Council, which has a focus on sustainability efforts for marijuana businesses.

“The writing is on the wall that we’re going to have to change some of our methods.”

But one common bit of advice is true for all cultivators: Be prepared for the unexpected, including unseasonably warm weather, stronger wildfires and more powerful tropical storms.

“Folks are navigating wildfires that are starting earlier and lasting longer,” Gelt said. “It is very difficult for them to truly adapt without relocation.”

Growers in California or other legacy growing regions can’t easily move their operations to another area or start growing indoors. But there are several ways growers can protect their farms from a devastating fire. A few key areas to consider:

Blair Kralick, chief operations officer of cannabis cultivator Hava Gardens on the Western Slope of Colorado, said the farm was right in the middle of two large wildfires last year.

To adjust, the team removed vegetation around the facility during the fire season to eliminate potential fuel sources, and employees tried to mitigate any risk on the property.

“Things can get out of control when it comes to wildfires,” Kralick said. “That’s our biggest concern.”

Scott Berka, owner of cannabis producer and processor Aloha Botanics in Washington state’s Okanogan County, created a 50-75-foot green barrier all around his property. He seeded that swath with cover crops. Common cover crops include clover, fescue and rye.

He can also use a tractor and a 4-inch swamp pump to pull water out of the river, if necessary, to fight a blaze. He keeps firehoses at each grow site as a precaution.

Having a generator is a must if growing in any region where the power company might shut off the electricity as a precaution. High winds during a dry spell, for example, might cause the power company to cut the juice so downed power lines don’t spark dry plant material.

Although this is more of a concern in Northern California, Chris Boucher, CEO of Farmtiva, a hempseed breeder in Santa Ysabel, California, said he’s concerned the power companies in Southern California will start shutting off power for the same reasons.

In a region such as Southern California, where most cannabis is grown indoors or in greenhouses, a few days without power will cook the plants, Boucher said. That’s where a generator is a must.

Depending on the weather and time of year, Boucher said, “In a sense, you’re more worried about the power getting shut off than a wildfire.”

The wider-reaching effects of these megafires can also impact most cultivators in less direct ways.

The smoke, along with airborne ash, can also blanket plants, ruining flower for retail sale and consumption.

To protect sun-grown cannabis from falling ash, outdoor growers can use hoop houses and pull light deprivation cloths over plants.

As a precaution, Berka surrounds his property with tin fences and green screens to help keep out ash.

In the southeast United States, markets with regulated cannabis operations such as Florida and Louisiana need to brace for hurricanes, which are steadily growing stronger, and the flooding that often accompanies them.

The company’s “primary climate threats have always been flooding and hurricanes,” Macias wrote in an email to MJBizMagazine.

To prepare for those issues, her company has developed a detailed, multiphase emergency preparedness plan to address all three potential disaster challenges.

Once the building is found to be safe and sound, the cultivation manager inspects grow rooms for damage and plant loss. The extraction and inventory managers conduct similar inspections of their own operations.

After that’s done, the executive team meets to discuss employees’ needs, provide an overall site assessment and mitigation plan and discuss timing for recovery and return to work. It also approves a recovery budget proposal and initiates a recovery plan.

As much of the American West experiences drought conditions this year, some growers are looking for ways to cut down on water use and make their operations as efficient as possible.

Julia Jacobson, CEO of Aster Farms, a cannabis cultivator in Upper Lake, California, has multiple water sources to draw from, including a well, an agricultural pond and rainwater.

She had her well tested this spring and discovered it could hold about 11 million gallons of water each year.

To put that in perspective, Aster Farms used only about 750,000 gallons to irrigate an acre of cannabis last year. The farm’s cannabis cultivation space is 50,000 square feet, and there are plans to expand to 120,000 square feet by the end of the year.

Of the three water sources, the well holds by far the most water. The ag pond, which is filled by diverting spring water during the allowed season, holds about 400,000 gallons, and the rainwater-catchment system is insignificant compared to the other two water-collection measures.

While it might sound as if Aster Farms has a lot of water sources, Jacobson is still paying attention to the drought.

“We’re concerned because if the drought continues at this pace, the well won’t be at 11 million gallons annually,” she said.

Driving around the region, Jacobson is reminded of the severity of the drought. For example, the water level at Lake Mendocino is lower than she’s ever seen it.

Jacobson believes cannabis cultivators have a responsibility to conserve as much water as possible. Illegal water diversion was a major issue in the legacy market before legalization, and if the legal operators want to set themselves apart, they need to practice ethical water use, she said.

“If you’re being efficient in your (water) delivery, that’s the best you can do,” Jacobson said.

Proper maintenance is also important. Drip lines and sprinkler heads clog with nutrients; making sure they are working properly helps with water usage.

“There’s minimal runoff, and all the water is used by the plants,” he said. 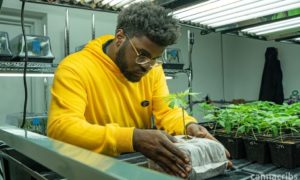 Jesce Horton, CEO of cannabis grower Lowd in Portland, Oregon, sees the environmental concerns around climate change as a looming threat. To combat water waste, he uses a water-reclamation system.

His dehumidifiers and air conditioners are connected to a system that recaptures water and routes it back to the company’s cold-water storage tank.

“Water availability and quality of water is always a concern of mine because it’s so important,” Horton said.

He tries to operate his grow with minimal runoff. In contrast to Hitchcock, Horton uses small pots with larger plants, creating a limited, concentrated root zone that helps save water.

Lowd is also in the process of designing a rainwater-catchment system.

“We’re making sure we’re part of the solution,” he said. “We have to be more environmentally conscious than the rest of the industries.

“We have got to focus on being a better industry and not just another industry.”

ALSO IN THIS PACKAGE: