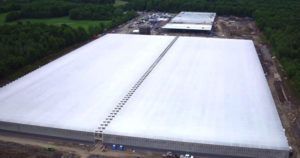 The Green Organic Dutchman’s greenhouse in Salaberry-de-Valleyfield, Quebec was designed to produce 185,000 kilograms of cannabis annually. (Photo courtesy of TGOD)

Canadian producer Green Organic Dutchman expects to sell its massive greenhouse in Salaberry-de-Valleyfield, Quebec, by the end of June, becoming the latest company to unload a cultivation facility amid a glut of cannabis.

As recently as last summer, The Green Organic Dutchman (TGOD) had said the structure was “expected to be the largest organic cannabis cultivation and processing facility in the world … if and when fully constructed.”

If a sale goes though as expected, it would continue an exodus from large-scale cannabis cultivation facilities by the country’s largest producers, who had engaged in an “arms race” to fund and establish the massive greenhouses in the months preceding and following legalization in late 2018.

That led to significant overproduction and billions of dollars in losses for companies such as Aurora Cannabis and Canopy Growth.

Many of the greenhouses have been sold for a fraction of their cost.

Selling the greenhouse is part of TGOD’s plan to monetize “underutilized assets, especially at its cultivation and processing facility in Valleyfield, Quebec,” according to a recent company news release.

The Mississauga, Ontario-based company said it received multiple bids for the property.

The property’s asking price was not disclosed.

But the company had spent 239 million Canadian dollars ($196 million) on the property as of last summer, including CA$16 million in accounts payable and accrued liabilities, according to a regulatory filing. In 2019, the construction budget was pegged at CA$174 million.

“We are pleased with the level of bids for the full Valleyfield Facility, which upon closing would allow us to potentially retire all debt and provide additional expansion working capital,” Sean Bovingdon, CEO and interim chief financial officer, said in a statement.

Bovingdon said most offers include an option for The Green Organic Dutchman to lease back a small portion of the facility it is still using.

In February, the company said it was considering a sale of the mammoth greenhouse.

Regulatory filings in 2019 suggested the greenhouse, when completed, was expected to be 1.31 million square feet in size and capable of producing 185,000 kilograms (407,855 pounds) of cannabis annually.

The plan for the facility underwent a major revision in late 2019, however.

The projected growing capacity was cut from 185,000 kilograms to 10,000 kilograms for 2020 in six grow zones, according to regulatory filing.

By that point, the company already had incurred costs of CA$228.9 million on the project, the filing states.

In the same news release, TGOD said it is “gearing towards” entering the U.S. market.

Specific actions cited by the company include:

The Green Organic Dutchman is also considering the potential sale or spinoff of its wholly owned subsidiary in Poland, HemPoland.

The company said it is also pursuing international opportunities in Germany, Mexico and Australia.

The Green Organic Dutchman reported a loss of CA$183 million in 2020.

The Green Organic Dutchman trades as TGOD on the Toronto Stock Exchange.

The Cannabis Industry Is in a Consolidation Phase

Cannabis Use Associated with Better Sleep for Seniors | High Times