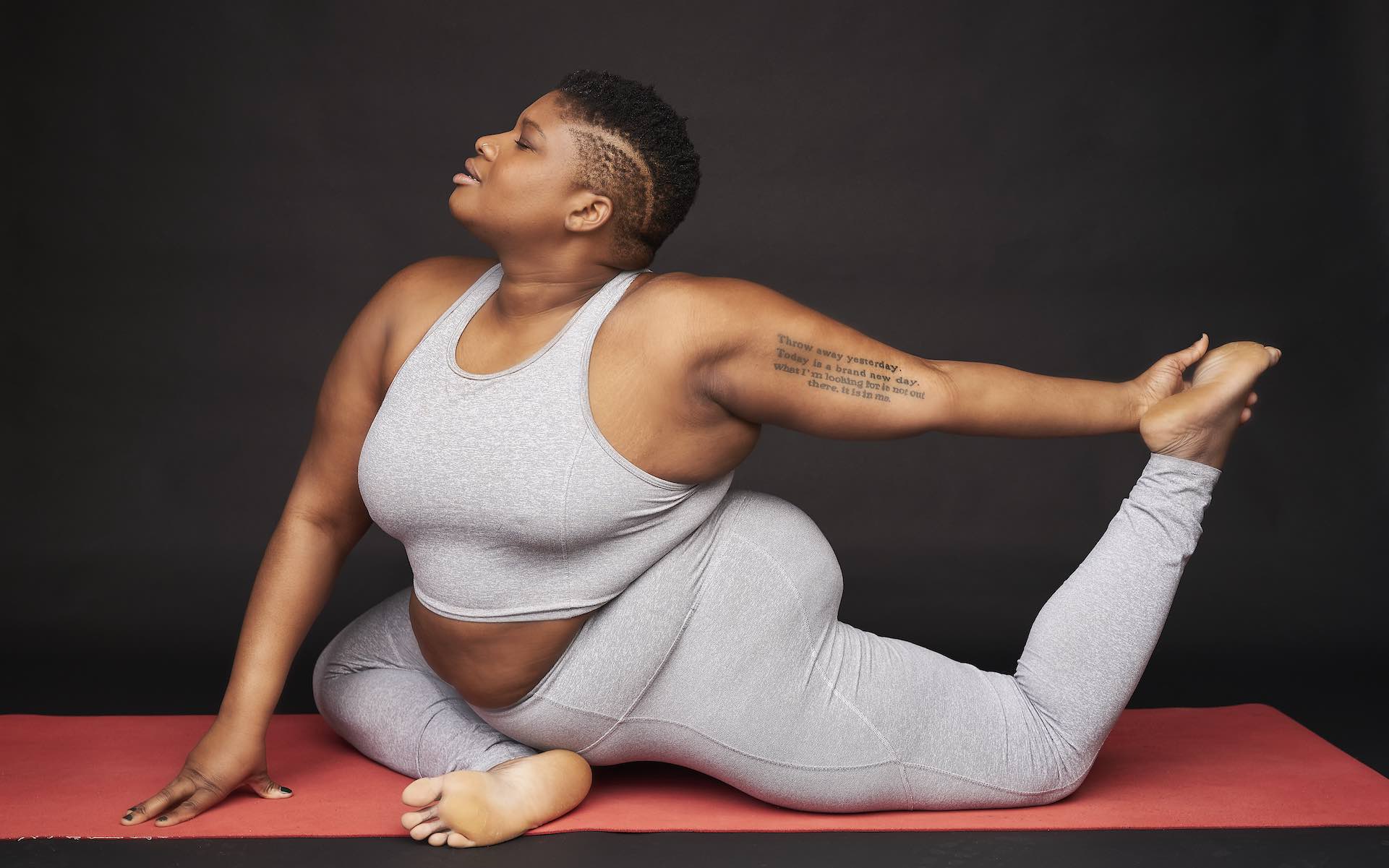 Yoga teacher and Instagram star Jessamyn Stanley’s book, podcast, and app have inspired millions. She’s body-positive and cannabis-positive. “Yoga and cannabis have always been deeply interwoven for me,” she says. (Photo: Bobby Quillard)

essamyn Stanley is no stranger to stigma.

As a self-described “fat black queer woman,” she’s been breaking down barriers in the more conventional world of American yoga since she first started posting about her personal practice on Instagram in 2012.

At the time, Stanley had recently dropped out of graduate school amid a bout of serious depression. After overcoming initial skepticism, she tried attending a local class and found that while the yoga worked wonders, she felt uncomfortable and out-of-place in a space dominated by thin, white, cis women. So she decided to practice at home for maximum privacy, while somewhat paradoxically documenting her progress online for all to see.

Posting and sharing to overcome isolation

“I started posting because practicing yoga at home can be very isolating,” she tells Leafly.

“While I wanted to share my practice with others, strengthen it, and also find community, the initial feedback I got online was mostly comments like, ‘I didn’t know fat people can do yoga.’ If it hadn’t been for that pushback, however, I probably wouldn’t have kept posting, because I also began to realize that there are a lot of people who do see themselves in my practice—and not just queer black fat people doing yoga. It’s literally anyone who doesn’t get represented in the mainstream.”

Which brings us to cannabis, something Stanley says she began privately advocating for long before she starting practicing yoga.

The decision to start sharing her personal positive cannabis experiences publicly, however, once again required an act of pushing aside stigma, ignorance, and exclusion in favor of speaking the truth. As a lifelong resident of North Carolina, it even meant admitting to occasionally living outside the law.

I’m teaching free LIVE yoga classes at @northstardurham at 10am EST and/or 6pm EST TODAY. It don’t matter if you haven’t showered in days or your ex isn’t texting you back or your tinder fling is ducking you out or you haven’t worn pants to work since quarantine started or maybe, just maybe, you couldn’t find the energy to do anything yesterday other than wake up. That was all the energy you needed to survive another day and that’s all that matters in this video game we call life. And today is 4/20, the high holy day! A day created by The Waldos to celebrate adventure, friendship, & what it means to be human. In today’s @theunderbellyyoga classes, there’ll be dope giveaways from our sponsor @curaleaf & I’ll be puffing on some local @trucehempco grown in beautiful North Carolina by people who are as proud to rep this state as I am. I’ll be wearing dope swag from my NC Cannabis policy & education initiative @wegohighnc- our t-shirts & burn kits are live in @theunderbellyyoga shop right now AND even if you don’t come to class, you should take our 2020 Cannabis Census & let your voice be heard. We’re streaming LIVE on @mynameisjessamyn, @theunderbellyyyoga, AND @wegohighnc’s IG Live, as well as my Youtube & Facebook AND @northstardurham’s FB so you know- you’ve got options. Which is convenient bc it’s raining outside of my window & maybe it’s raining outside of yours & rainy days are the best days to duck out yoga classes but when it’s 4/20 & you’re being forced to stay inside on a Monday morning, what better way to celebrate than by elevating together from the comfort of your home? Photos are by my love @cdo.photo @jessamynsmokes EDIT: @theaishanash Hey! Class will stay live here for 24hr and we’ll post the @thejadewilson director’s cut on YT in the near future. ❤️❤️

She also faced potential fallout from her online supporters, her students (she’s now a certified yoga teacher), readers of her book Every Body Yoga, listeners to her podcast Jessamyn Explains It All, users of her app The Underbelly, and the yoga-industrial-complex.

“Eventually I realized that I wasn’t really being honest because I wasn’t talking about weed and how it’s a huge part of my yoga practice and medicine,” she says. “I also believe that so much of why cannabis remains prohibited where I live and many other places is because we’re not talking enough about it.”

Nowadays, Stanley’s Instagram feed features copious photos of her puffing on pre- and post-yoga joints. We asked her to share some helpful tips for integrating cannabis into your own yoga practice and daily life.

Leafly: When did your personal journey with cannabis begin?

Jessamyn Stanley: I encountered cannabis a little bit in college, but it wasn’t until 2010 that I started a relationship with someone who regularly consumed it and they introduced me to a whole new understanding of the plant.

I have really intense anxiety, and I don’t come from a family where talking about mental health is encouraged to any degree. So I never went to therapy as a child, nor was I prescribed any medicine. And now I realize that a huge part of why my partner was able to help me get me into cannabis was because it was the medicine that I needed that whole time to treat my anxiety.

When did you begin to incorporate cannabis into your yoga practice?

Yoga and cannabis have always been deeply interwoven for me. I can’t really conceive of my yoga practice without cannabis because it’s been there from the very beginning.

For me, cannabis is a way to have a deeper experience with yoga. Anything that draws you more into your spiritual body and into your subtle body and away from the noise of the material world is so helpful.

Cannabis allows me to tap into layers within the self that are so much deeper and richer than any of the bullshit that’s happening in my day-to-day life. And it doesn’t have to be some big thing where you go to a special CBD yoga class or something like that. You can just find an online class, take a hit off a bowl right beforehand, and then see how you feel.

Have you experienced any negative repercussions from speaking out about cannabis?

One of the things that I’ve noticed is, a lot of the prejudice with yoga people and weed stems from the same racist shit they’re already doing, anyway.

The yoga world is extremely racist, very deeply white supremacist—very fat phobic and very much afraid of black women in general. Modern yoga culture reflects the values of racism, white supremacy, and fat phobia which perfume the rest of mainstream society. Many people refuse to acknowledge this reality, but that doesn’t make it any less apparent to those of us who routinely face discrimination in the yoga world.

So I have long discounted the authority of the yoga establishment, which is really only focused on projecting and supporting a very specific idea of yoga, one that doesn’t have anything to do with me.

So as a result, any pushback that I’ve received from them, I feel, is mostly born out of this idea that if you use cannabis, then you’re not a worthwhile person. And I’m just not here for that.

Still, it was a really scary decision to start speaking up as an advocate. I’m not on a team, I’m not in a band or something. I don’t have other people to lean on. I’m just standing here kind of solo. But I just thought, what’s the point of having a platform if you’re not going to use it? What am I going to do? Only talk about being fat because that’s what people are comfortable hearing about? And actually, they’re not even comfortable hearing about that.

And when you did go public, you did it in a pretty big way, right?

I was on the cover of Yoga Journal in February 2019.

That was the first time that I was ever photographed smoking weed, which was very deeply liberating for me because I felt like I’d talked about body liberation for so long, but I was still wearing chains. I can feel comfortable with my body all I want, but it doesn’t matter if I can’t speak freely, you know what I mean?

Getting rid of that stigma is the key to everything else.