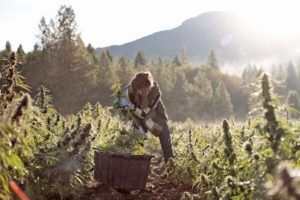 (This is an abridged version of a column that appears in the May-June issue of Marijuana Business Magazine.)

While still fairly small, East Fork Cultivars has become one of the most respected cannabis cultivators in the Pacific Northwest.

The family-run business based in Takilma, Oregon, wants to increase its profile this year while capitalizing on national revenue opportunities.

After launching in 2015 as a grower of CBD-rich hemp through sustainable, sun-grown cultivation methods, East Fork Cultivars has expanded into CBD-dominant marijuana.

Now, the Oregon company wants to market its cannabis to brands across the United States.

One way East Fork hopes to make that happen is by opening a retail presence in Portland, Oregon, this fall.

In that space, customers will be able to consume CBD-infused products and get acquainted with the company’s commercial seed line.

“We did just over $2 million in top-line revenue last year, so we’re still quite small in scale,” Mason Walker, CEO and co-owner of East Fork, told Marijuana Business Magazine. “However, the complexity of what we do and our outlook moving forward is certainly more ambitious than our current scale.”

Walker shared with Marijuana Business Magazine the steps East Fork has been taking to increase its scale, including:

East Fork, which was recognized as an industry leader at the inaugural MJBizDaily Awards, also broadened its scope by exploring such areas as legalization advocacy, educating potential customers about CBD and expanding into cannabis science.

The best vaporizers for cannabis oil and concentrates