CO2 from Denver Beer Co. helped grow this Bubba Kush from The Clinic. (Courtesy of Lauren Mims, The Clinic)

Can the belches of fermenting beer shrink the cannabis industry’s carbon footprint? That’s the goal of a pioneering new program out of Colorado that seeks to capture breweries’ excess CO2 and use it to power plant growth at nearby cannabis cultivation facilities.

The Colorado pilot program, now in its third week of operation, is a proof-of-concept project meant to show how technology, cooperation between industries, and a little help from government can allow both craft brewers and cannabis growers to reduce their environmental impact—all in a way that makes economic sense.

For now the pilot project is small, involving only Denver-based cannabis cultivator The Clinic, brewer Denver Beer Co., and Earthly Labs, who created the carbon-capture technology. But participants say the partnership between cannabis and craft beer is one that could be expanded easily and replicated in other states. Many legal-cannabis regions, they point out, have thriving craft beer industries, including the West Coast, Michigan, Massachusetts, and parts of Canada.

“These pilot programs combine a few of the things that Colorado is known for: environmental responsibility, craft beer, and cannabis,” Colorado Gov. Jarid Polis said in a statement last week. “I applaud our state agencies and private partners for working together on these innovative programs to help protect the Colorado way of life.”

How the system works 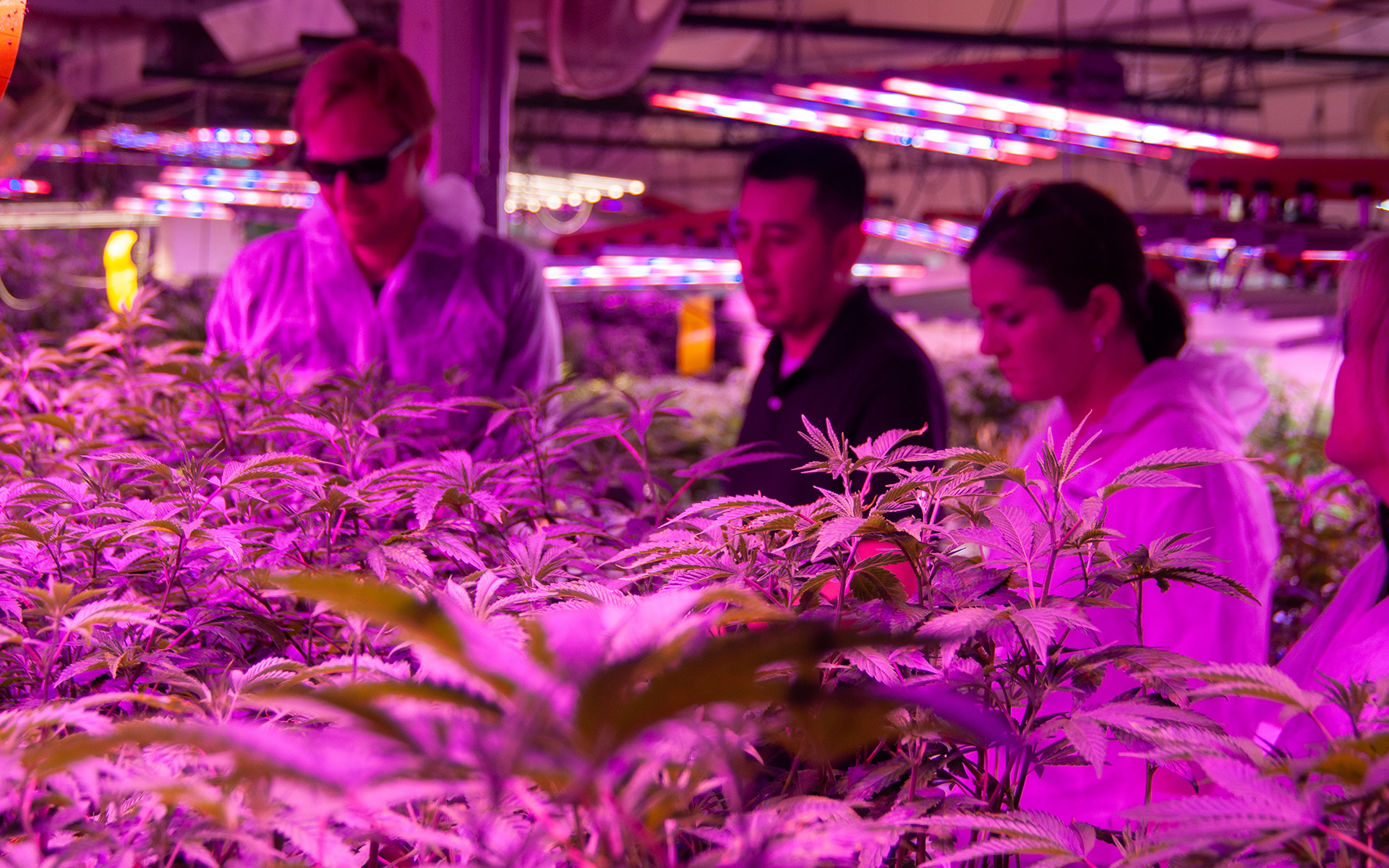 At its roots, Colorado’s carbon-capture pilot program is a simple story of supply and demand. When yeast breaks down sugars during beer’s fermentation process, the microbes produce two key byproducts: alcohol and carbon dioxide (CO2). The alcohol remains in the beer, but CO2 from the process bubbles out and escapes into the surrounding air.

Cannabis growers have a different relationship with carbon dioxide. CO2 fuels the photosynthetic process that gives a cannabis plant its energy, propelling it through its lifecycle of vegetative growth and flowering. Under bright indoor grow lights and with access to plenty of nutrients and water, cannabis plants have a voracious appetite for carbon dioxide. To help supplement growth, indoor growers often purchase additional CO2, usually derived from fossil-fuel-burning plants and trucked in from a distance.

Supplemental CO2 “is absolutely needed to grow cannabis,” said Brian Cusworth, The Clinic’s operations director. Under the pilot program, The Clinic is expected to receive about 2,000 pounds of CO2 per month initially, but that could soon increase. The Clinic grows about 1,200 plants year-round at its 6,000-square foot indoor cultivation facility in Denver, Cusworth said. “We use just under 6,600 pounds of CO2 a month.”

Project organizers say the program could eventually capture as much as 100,000 pounds of CO2 annually, “which would be more than enough for our entire grow for the year,” Cusworth said. “That’s our goal: How can we replace our industrial CO2 with this more pure CO2 from Denver Beer Co. more completely?”

Carbon capture isn’t a new idea in the beer industry, but technological advances in the past few years have made the practice more economically feasible for small brewers. According to participants in the Colorado program, the tipping point came when Earthly Labs created its carbon-capture technology, which the company has dubbed CiCi.

As carbon dioxide is collected off fermenting beer, CiCi—which is about the size of a household refrigerator—runs it through a three-step process of purification and compression, then packages the CO2 into tanks.

This isn’t the first time breweries have put CiCi to use, but historically they’ve used CO2 only for internal operations, such as carbonating beer. Colorado’s pilot program marks the first time it will be put to use growing cannabis.

“This is a waste commodity,” said Urso. “The brewery was basically just venting dollars out into the air prior to this technology, prior to this partnership. They’re capturing these dollars that would’ve just been floating away.”

As for the cost to cannabis producers, Urso said the current prices are matched to market prices for CO2. Once the partnering brewery pays off the equipment, she said, the businesses are free to negotiate their own terms.

Participants told Leafly that they expected their initial investments, including CiCi technology at the brewery and updates to hardware at the cultivation facility, are expected to pay for themselves in about two years.

Data in the air 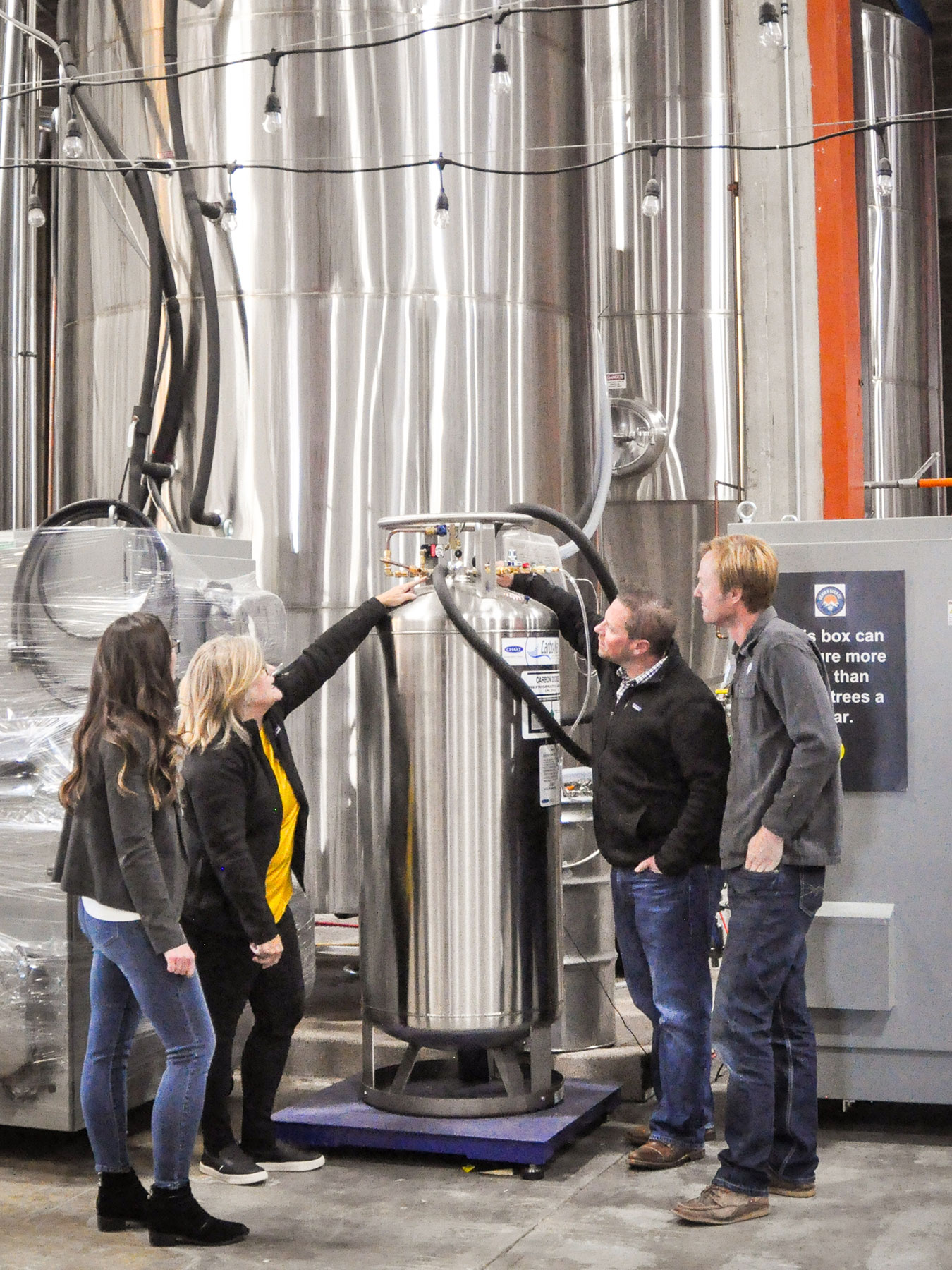 Colorado’s pilot program is about more than swapping sources of CO2. It’s also an opportunity to better quantify how much supplemental carbon dioxide the cannabis industry uses—and how much might eventually be replaced by more sustainable sources. “All of those numbers are something that we’re trying to flesh out with this pilot program,” said Urso, who is also working with a group of about 30 researchers in partnership with the National Cannabis Industry Association (NCIA) to assess the industry’s overall environmental impact.

“We all need to get on a level playing field of what are the environmental impacts, what are the resource inputs and outputs of the industry, so we’re all on the same page,” she said.

Cannabis growers are also curious whether the beer-brewed CO2 could make for better bud. Earthly Labs says its CiCi-produced gas has a higher degree of purity than CO2 produced by traditional factories, which can contain higher levels of fossil fuel byproducts and other contaminants.

At The Clinic, growers will be carefully monitoring plants grown with recaptured carbon dioxide, comparing them to plants grown with factory-produced CO2. “The main thing we’re going to look at is the plant growth,” said Cusworth, including the growth rate, color, and yield for a variety of cannabis strains. “If it makes the plant an even better quality, honestly that’s just a plus.”

A blueprint for other states

With Colorado’s pilot program aimed at small businesses, widespread adoption will be needed to make a meaningful dent in carbon emissions. So its supporters are working to spread the word. Not every state, after all, has free environmental consultants who are experts in craft beer and cannabis.

“I’m a mechanical engineer who’s spent the last 10 years of my life dedicated to helping business reduce their environmental impacts in economic ways,” Urso said. While other states do make environmental consultants available to small businesses, she said she isn’t aware of any others who specialize in cannabis.

“Rising tides lift all boats, you know? We’re doing a lot to try to help other states,” Urso said, noting her partnership with NCIA and the forthcoming environment white paper.

In her view, Colorado’s willingness to work with cannabis businesses and solicit their feedback has helped strengthen the working relationship between the industry and the state. “We can still meet regulatory concerns but have a more logical path,” Urso said. “Because cannabis is so new, oftentimes the people in charge of implementing those decisions don’t understand how they apply.”

For a proof-of-concept perspective, she said, Colorado’s pilot program is already a success. The next step is expansion.

“We did it. We showed that it can be done once. If it can be done once and we can make it have economic, environmental, and societal sense,” Urso said, “there’s nothing stopping this project from being repeated thousands of times across the country.”

Ben Adlin is a Seattle-based writer and editor who specializes in cannabis politics and law. He was a news editor for Leafly from 2015-2019. Follow him on Twitter: @badlin