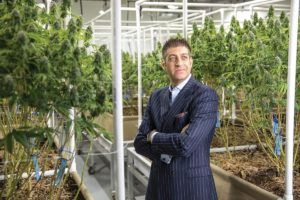 Adam Berk, CEO of Driven by Stem, visits one of the company’s cultivation sites in Oregon.

(This story is part of the cover package for the July issue of Marijuana Business Magazine.)

Many marijuana executives share the goal of growing their businesses, but how they achieve that can take many different avenues.

Just ask Adam Berk, the CEO of Driven by Stem, a vertically integrated business operating in five states, and Josh Genderson, CEO of Holistic Industries, which operates in six states plus Washington DC.

Berk, the founder of food-delivery service company Osmio, which became Grubhub, focused on establishing brands, proving them in a tough market and then taking them into other states through M&As. The arrival of COVID-19 compelled Berk to update his strategy.

“For us, it’s all about e-commerce and delivery and building brands,” he said.

Genderson, the CEO of a well-known family liquor store business in Washington DC, didn’t plan to take his medical marijuana business national, but his first success highlighted the opportunities that awaited.

Success bred capital raises that have allowed Holistic to add M&A to its scaling toolbox, but securing licenses remains central to its strategy.

“Our bailiwick has been limited-license states. Those give you a natural competitive advantage,” Genderson said.

Following are in-depth looks at how Driven by Stem and Holistic Industries achieved their goals:

Stem launched in 2016 in Oregon, and Berk says scaling and going national was the plan from the get-go. Berk chose to start the company in Oregon because it was a mature market with some of the best cannabis expertise in the country. He figured his young company could partner with or acquire and learn from veteran businesses and then take that expertise national.

“It gave us the ability to build a successful brand in a competitive landscape, which is where we think the entire country will be at some point,” Berk said. Oregon has “a robust market and has been around for a long period of time.”

The company also partnered with dispensary operators in Oklahoma to launch a Stem-branded dispensary there, and it launched the Travis X James (TJ’s) cultivation brand in Nevada. Stem also built out an extraction division that used solvent and solventless techniques, allowing it to expand its edibles company, Cannavore.

Berk figured it was important to be in California because of the market’s size and the innovation happening there. In 2019, he acquired Foothills Health and Wellness, a well-known medical marijuana dispensary near Sacramento. That same year, Stem became an investor in Rebelle, a dispensary in Great Barrington, Massachusetts, that opened in 2020.

During the COVID-19 pandemic, Berk noticed boxes piling up on his doorstep and his neighbors’.

“We realized that the future was going to be delivery. Once you started to see that trend, and curbside (pickup), we realized that we needed to be in that last-mile delivery business,” Berk said. “I also knew from building Osmio that it would take two years, and I felt like we didn’t have two years.”

The deal—valued at $31 million when it was announced—closed Dec. 30, 2020, and the company became known as Driven by Stem.

“They were acting almost like an Amazon, where they would bring the products into their distribution centers and do a B2C delivery. We really liked that model, so we acquired them. Now our goal is to expand that platform,” Berk said.

The idea is to expand Driven into new markets and go deeper in the states where the company already has a footprint.

“We will lead with e-commerce and delivery, and then right behind that will be all of our brands, knowledge, know-how and IP. So we want to get connectivity with the consumer, No. 1, and then be able to bring right behind it our own products,” Berk said. “It’s innovative, it’s disruptive. … And it helps give us a competitive advantage. It’s very important having that connectivity to the consumer day-in and day-out.”

The acquisition of Driven played to Berk’s strength as an e-commerce and delivery pioneer in another industry. It also meant he could provide answers to questions about user interface, SEO strategy, logistics, artificial intelligence technology, selecting and coordinating routes, crafting standard operating procedures, public relations and marketing strategy and more.

The first test of this strategy took place this May, when Driven launched its delivery services in Oregon. It also announced that it would expand into Michigan by Labor Day.

To prepare for the launch of Driven by Stem delivery in Oregon, Berk said his team spent April and May buying cars, outfitting them with lockboxes and GPS tracking, hiring and training drivers, logistics coordinators and a pick-and-pack team, plus obtaining insurance and payroll processing. The company also integrated its back-end technology with Metrc, the seed-to-sale system mandated in Oregon, so that when users come into the e-commerce and delivery portal, they can pull up Driven by Stem’s menu in real time.

At press time, Driven by Stem engineers were building the front-end interface. “So, when a user comes in, we’ll know who they are, what city they are in, user preferences, whether they are in the delivery zone and any sort of specials for the day,” Berk explained. “Once that component is completed, then we will be able to execute.”

While Berk has decided that Driven will be the battering ram that takes his company into other states, he must now decide what markets to enter based on factors such as demand.

“We look at the demand curve and make sure that there is a need and a want for this sort of service, which we believe most states have,” Berk said. “Any type of licensing opportunities that are available. And then, can we execute in that market in a cost-efficient way? All three of those things play into where we’re going to go next.”

BEAST OF THE EAST

Genderson, a fourth-generation co-owner of Schneider’s of Capital Hill, a 72-year-old family liquor store in Washington DC, won one of the city’s first grower/processor licenses. In 2012, scaling wasn’t part of Genderson’s plan for Holistic.

“Initially, I thought it would just be a fun side project,” Genderson said.

But Holistic was doing well in Washington DC, and Genderson spotted new opportunities as markets opened along the East Coast. He focused on limited-license states that allowed vertical integration and then, in 2014, applied for licenses in Massachusetts and Maryland, followed in 2016 by Pennsylvania. All three vertically integrated licenses were awarded in 2017, and Genderson opened them under the brand name Liberty.

“I got them built, set them up, got them operating, got stores open in all those states and became vertical—with a big emphasis on wholesale and retail. We’re on every shelf in every one of those states,” Genderson said.

He explained that having retail stores in addition to wholesale product helps build recognition for Holistic’s brands.

“We try to be on every shelf in every (market) that we’re in,” Genderson said with regards to his wholesale efforts. “Brand equity is really important.”

Building regional presence is critical to Genderson’s scaling strategy, mainly because it aids in brand building.

“We’re very cognizant of trying to apply and win licenses in states that would add to our regional concentration,” Genderson said. “Being able to drive up and down the Northeast and the mid-Atlantic and the Midwest and seeing our brands and our stores—and people know they’re in a Liberty store, whether you’re in Massachusetts or Maryland—it really adds value to the company.”

While winning licenses and building regional presence remain the linchpins of Genderson’s strategy, he hasn’t shied away from raising capital so Holistic could pursue an M&A strategy.

“We raise capital not only to keep up with our public competitors but also to do accretive transactions and bring in more assets—and to continue to follow this regional strategy,” Genderson said.

Before winning the three East Coast licenses in 2017, Genderson felt confident enough about his company’s prospects that he raised $40 million in 2016 from family and friends to use toward facilities in those markets and to expand elsewhere on the East Coast as well as in California, which had just passed Proposition 64, the state’s recreational legalization initiative.

Even though it went against Holistic’s limited-license state strategy, the company bought retail licenses in Los Angeles, San Francisco and the San Fernando Valley in 2018.

While acquiring and building out assets in California, Holistic raised another $55 million in 2019 and successfully applied for licenses in Michigan, Missouri and West Virginia.

“We continue to prove that not only can we do it in East Coast, regulated markets that had moats around them, but we can do it in hypercompetitive markets like California,” Genderson said.

In May of this year, Holistic secured a $55 million convertible note to launch its Missouri and West Virginia operations and break into new markets such as Illinois, New Jersey and Virginia, where it has already filed license applications.

Although winning licenses is Genderson’s preferred route when it comes to scaling, he said M&A is always an option when circumstances merit such an action, as California showed.

Another situation that merited an M&A move arose in Maryland, where businesses are allowed to have up to four retail stores. Holistic won one grow license, one processor license and one retail license. Since it couldn’t apply for any more retail licenses, the company did “tuck-in acquisitions,” buying stores in Baltimore and Prince George’s County to complement the store they already had in Montgomery County.

“As things progress, and as there’s more consolidation and as the federal government moves in, we’ll look at M&A a little bit more broadly. Because buying revenue and buying mature assets can be really accretive if you do the right deal,” Genderson said.

“A lot of the licensing, a lot of the applications that we won are assets that are being built out now. Those will continue to open and will add to our scale, add more revenue and more EBITDA,” Genderson said. “I think M&A will play a more crucial role now that you’re seeing so much consolidation.”

ALSO IN THIS PACKAGE:

What you need to know about edibles in Nevada | Leafly

Study Looks At Weed Strains From Four Regions To See Which Ones Yield The...

The Second Greatest Story Ever Sold