Imagine this scenario: A handful of senior citizens lace up their sneakers for an extended walk through the West Edmonton Mall. They meet up at a pot shop and, before their excursion, take a guided tour of the store to learn a little about cannabis.

If all goes according to plans laid out by Aurora Cannabis, this scenario will be a reality.

The Edmonton-based company has just opened a massive store in the mall, and its built to do more than sell cannabis and accessories. It’s also designed to foster conversation about cannabis within the larger community and help break down the stigma surrounding the plant.

Zamina Walji, Aurora’s vice president of retail and consumer strategy, has described community engagement as one of the Edmonton-based company’s “key values.”

The 11,000 square foot destination is the biggest cannabis retail space in the country. Its split into two sections—a cannabis store and an immersive, experiential space. The age-gated sections are connected by a hallway that has a mural painted by the local art collective, Rust Magic.

Aurora enlisted designers and architects to create a space that alludes to technology, innovation, and nature.

The material, lighting, and digital experiences are all shaped by references to mountains, sky, water, and sun. Quartz and oak are prevalent throughout the space, which also features a digital skylight that simulates the effect of natural sunlight and blue sky.

In the other section, Aurora is selling a wide range of cannabis-related products, from natural soaps to puzzles, colouring books, and colour-changing umbrellas.

This section also includes what the company describes as “post-consumption products,” such as candies, munchies and even tracksuits that are ideal for lounging on the couch. 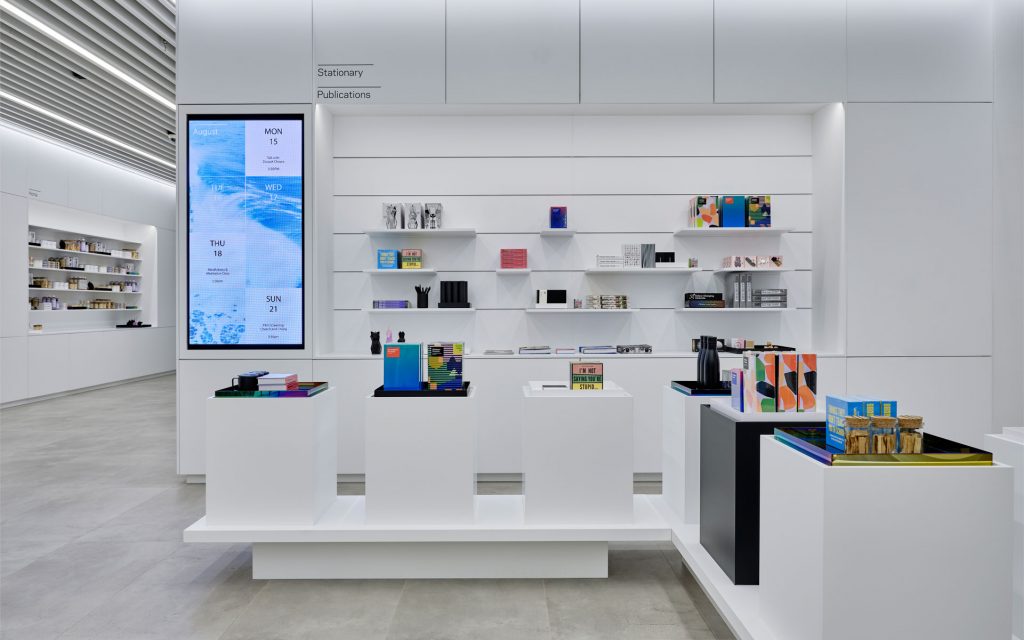 Aurora plans to hold classes in this experiential section, including one on cannabis cuisine and another on the therapeutic uses of CBD. It’s holding many other events too, ranging from comedy nights and movie nights to mall walking.

Aurora hopes all these events will encourage people to “lounge, learn, and explore the cannabis movement” and, ultimately, to help destigmatize cannabis.

“We’re not trying to establish a cannabis community. It already exists,” Rebecca Farronato, the company’s director of retail, told Leafly. “We want to break down the stigma surrounding cannabis, and expand the cannabis movement, so we’re holding events that promote inclusivity and conversation.”

She says the opening of the store itself represents a big step forward. “We’ve opened a big brick-and- mortar store in huge mall. This represents an important milestone for Canadian cannabis.”

Leafly Canada is based in Toronto, with correspondents and contributors stretching from Newfoundland to BC. To reach our editorial staff please contact us at info@leafly.com.

DEA Plans to Grow 3.2 Million Grams of Weed for Research Next Year

Illinois dispensary tax rates and where that money goes