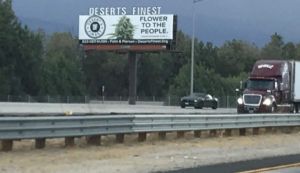 This billboard on Interstate 10 for a marijuana retailer in Desert Hot Springs is among the signs that are banned along certain California roadways. (Photo by Chris Casacchia)

It’s just green text over a whiteboard, touting Palm Royal Collective as the No.1 cannabis dispensary in Southern California’s Coachella Valley. The only art element is a palm tree logo in the top left corner.

That billboard, among a dozen or so on Interstate 10 in the Palm Desert area, and countless others throughout California, are now prohibited under a recent court order from Judge Ginger Garrett of San Luis Obispo County Superior Court.

The decision underscores the legal hurdles that all marijuana companies face when trying to promote their brands through advertising, social media and other platforms.

Garrett ruled in November that the Bureau of Cannabis Control (BCC) shirked its authority by banning marijuana advertisements only within a 15-mile radius of state borders when it should have prohibited all MJ ads on any interstate or state highway crossing the California border.

The latter approach was in keeping with Proposition 64, the 2016 ballot measure overwhelmingly approved by voters that legalized recreational cannabis and established a framework to regulate the industry, the judge ruled.

Garrett, who wrote in her ruling that the BCC promoted interests ”inconsistent with the protection of the public,” ordered state regulators in mid-January to notify every licensed cannabis brand in California of the law change.

Since then, the BCC has been trying to eradicate illegal signage throughout the state’s vast web of freeways and interstate highways that cross state lines.

“We’re just working with operators to try and understand their individual circumstances and get boards removed as quickly as we can,” BCC spokesman Alex Traverso said.

For many companies, such as Palm Royal Collective, there’s little recourse in the ever-changing regulatory landscape in the world’s largest cannabis market.

“We’re planning to take it down,” said owner Mike Berk, who’s been running billboard ads for the past 18 months.

The court ruling is the latest prohibition in California limiting cannabis marketing and advertising.

“There are very tight restrictions on who cannabis companies can market and advertise to,” said Los Angeles attorney Jennifer Gumer, a partner at CGL who leads the Los Angeles firm’s regulatory and compliance practice group.

Those aren’t the only restrictions on advertising California cannabis companies face.

Under state law, at least 71.6% of the target audience must be 21 or older, and 74 of California’s 534 cities and counties – or roughly 14% – impose even stricter advertising rules, according to a study published last year by the Journal of the American Medical Association.

Of those jurisdictions, 14 ban billboards and other outdoor advertisements outright.

Outdoor marketing, according to industry insider Rob Costello, is a crucial component to cannabis advertising, especially when it’s hyper-local and can grab the attention of consumers in their neighborhoods or on their commuter routes.

“The more you see it, the more it legitimizes the industry,” said Costello, chief growth strategist at Los Angeles-based 10K Advertising, which specializes in advertising and billboard ad-buys for cannabis brands.

Outdoor marijuana advertising is drawing attention inside the halls of the California state capitol, where competing legislation has been proposed:

“That promise has been broken, and this bill is an attempt to rectify that,” she said, listing instances when billboards marketed cannabis cookies, lemonade and gummies, among other products.

“These billboards are clearly advertising to children. This is not the intent or spirit of Prop 64.”

Nate Bradley, a former police offer who is now a cannabis advocate, said limiting marketing options for licensed marijuana businesses threatens the industry’s survival and expansion while ultimately leading some consumers to the unregulated market and unlicensed retailers who often don’t check IDs or provide other safeguards.

“We allow (illegal marijuana companies) to keep expanding when bills like this get passed into law,” said Bradley, executive director of the Cannabis Consumer Policy Council in Sacramento.

Irwin said cannabis companies have many other ways to advertise, including social media, radio and magazines.

“Those can all be determined to reliably have an audience composition that is in compliance with Prop 64,” she said.

However, most social media platforms – including Facebook, Instagram, YouTube and TikTok – impose curbs on any mention of cannabis sales, prices, discounts, store locations or links to any of the aforementioned.

“With all the existing restrictions around cannabis advertising, there are few options available for legal companies to gain visibility and compete against the unlicensed market,” said Amy Jenkins, a lobbyist for the California Cannabis Industry Association, which supports AB 1302.

“Billboard advertising is an essential tool for licensed cannabis operators,” she added. “The more tools we have to drive consumers to the licensed market, the more opportunities we have to boost job growth and economic development.”

Closing another marketing option could open up more revenue opportunities for platforms such as Eaze and Weedmaps, which provide both marketing and delivery services. Both companies have frequently used billboards for advertising and educational campaigns.

“Companies like Eaze rely on marketing efforts, including billboards, to not only spread the word of cannabis products but also educate and spread awareness of the benefits of cannabis,” Eaze spokeswoman Elizabeth Ashford said.

“Removing billboards will not only influence consumer acceptance, which has been an uphill battle for the industry but removes another outlet for income among companies in the space.”

San Francisco-based Eaze was among more than 40 brands that opposed AB 273 in an April 1 letter to Assembly member Evan Low, who chairs the Business and Professions Committee, the first to analyze and address the bill.

Chris Casacchia can be reached at [email protected].

Recipe 101: Canna-cupcakes for every occasion